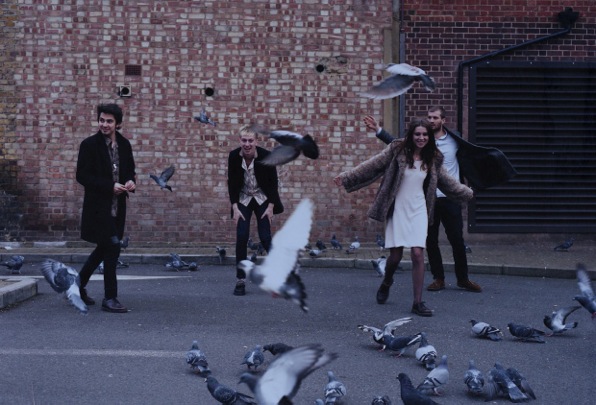 Wolf Alice aren’t your typical ‘rock’ band, their grunge sensibilities cross over to appeal to people who are into Chrvches right through to Veruca Salt, Elastica and Hole.

The release of the single Moaning Lisa Smile from last years Creature Songs EP got the world’s attention and Giant Peach from their forthcoming album
kicks things into gear with a huge groove and a confrontational, Siouxsie Sioux-esque snarl delivered by vocalist Ellie Roswell.

The video for Giant Peach sees the band take on a rock-mockumentary not afraid to poke fun at themselves or the rock industry.

Elaborating on the concept behind the video Ellie explains, “Here we are trying out our questionable acting skills once again. It’s almost a sequel to our video Fluffy and a look in to the future of Wolf Alice –
featuring lots of leather, hip thrusting, murder and a very naughty manager”

Wolf Alice have appeared on the prestigious BBC Sound of 2015 long list, been named as one of iTunes’ ‘Artists For 2014’, become the #4 most blogged artist of 2014 on the UK Hype Machine Blogs,
winning Best Breakthrough Artists at the UK Festival Awards and touted by the likes of NME (Young Britannia – Future Of British Music), XFM (Great Xpectations) and Hype Machine (Ones To Watch),

The band have sold-out shows in LA and New York, and have appeared at Reading, Leeds Festival & 6Music festivals, Longitude and SXSW.
They are now set to appear on Splendour In The Grass and will be playing sideshows in Melbourne and Sydney.