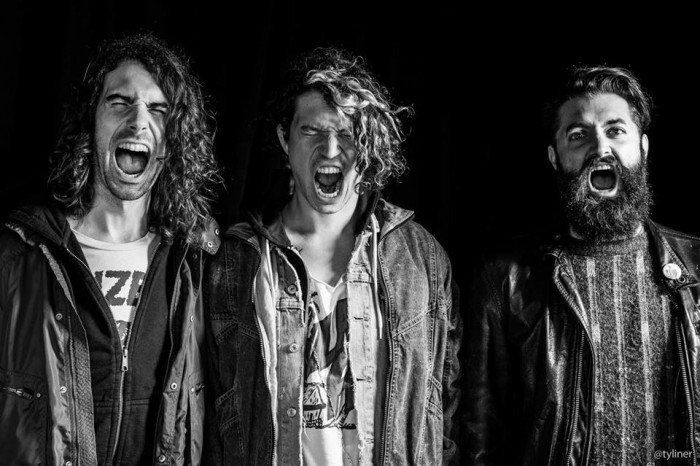 The Chicago-based punk/garage power trio ¡Vamos! are embarking on a ten day, six city tour across the Midwest in advance of two national tours in September and October. They’ll be playing songs from their new album, Spiderbait, in stores now on Maximum Pelt Records. The first video (for the title track) has been released…their kinetic live energy is captured until they are attacked and strangled by their guitar chords. Watch it !

Spiderbait’s ten tracks reveal lurching brutality and raw energy with pop hooks and melodic backing vocals as counterpoint, resulting in tunes that are cathartic and addictive.  The LP was recorded and mixed by Dan Rico at The Ottoman Empire.

The band (Jawshua Drumms – drums, Will Wood – bass, Ryan Murphy – guitar/vocals) formed during the epic blizzard of 2011 while they holed up in an apartment attic. DIY musicians to the core, they began playing at underground venues like Wally World and Animal Kingdum and quickly garnered notice from the blog world, with Chicagoist saying “We pretty much fell in love with Vamos the first time we saw them at Township…

The local punk rock trio has a potent and turbulent energy both live and in their recorded material.” They began touring nationally, hitting both coasts and SXSW while playing with bands like The Orwells, Brody Dalle and Andrew W.K.

The band released the Heatwave EP in 2013, followed later that year by the Demon/Do Wanna EP with Chicago Singles Club. Loudlooppress featured them as a local band to watch in 2014 and were selected for the Red Bull Sound Select program. Later that year they released Midwaste and kicked off a two month tour in support, as well as rocking Riot Fest. The band recorded Live at Studio 10 for Vocalo Radio – for a taste of the live sound listen here: https://soundcloud.com/livefromstudio10/vamos.

Tour dates are as listed below.