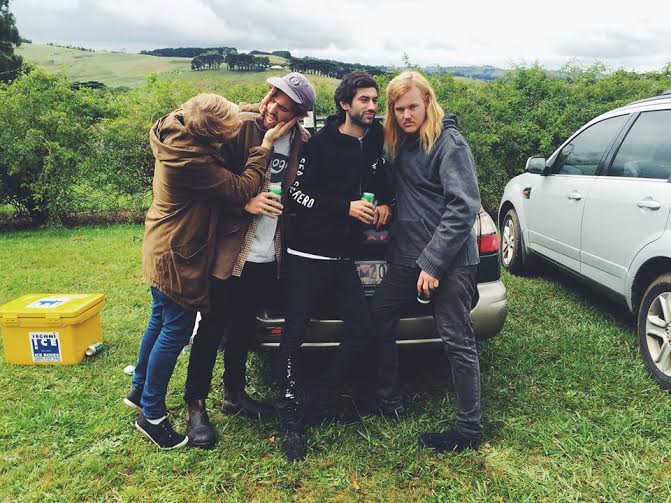 Melbourne’s The Pretty Littles will release a new mini-album ‘Gospel’ next month before hitting the road with friends Ceres and Sincerely Grizzly.

The Pretty Littles have developed monumentally in the last few years and there are splashes of that all throughout their newest offering, Gospel. Recorded intermittently over six months with Vasco Era producer Neil Gray, it’s a collection of music that hints at the love for early-to-mid-2000s rock that originally brought the Melbourne outfit’s members together. It also reveals a matured sense of songwriting and performance that is their own signature creation, undoubtedly the result of hours and hours sweating it out on stage for their own sell-out shows, as well as warming up the punters for the likes of The Vasco Era, The Mess Hall, The Cribs, The Smith Street Band and Bad//Dreems.

The Pretty Littles hope their CD finds a home in the cluttered glove box of your car amongst some suspect-looking napkins and a novelty lighter. That you put it on when you’re cleaning your house or getting ready to head out. They hope it induces the odd day dream when you’re on a crowded train on the way to work. They want you to put it on real fucking loud when you’re riding home quarter flash and half cut. Even if you just like the odd song or two, that would tickle their giblets in a big way.

Speaking of giblets, few things are likely to weird out your weekend better than their new video for their previously released track Man Baby. Full of blokes in ball gowns, ill-advised dancing lifts, and explosions of confetti, it’s the most weirdness packed into one shot since Birdman: Or (The Unexpected Virtue of Ignorance).

Gospel is set for release June 9th, just before the band accompany rising Melbourne punks Ceres on a national tour that will see them bringing the warm and fuzzy feels to Australian audiences throughout winter.

They’ll then return home to officially launch Gospel at The Workers Club in Fitzroy on July 31st.