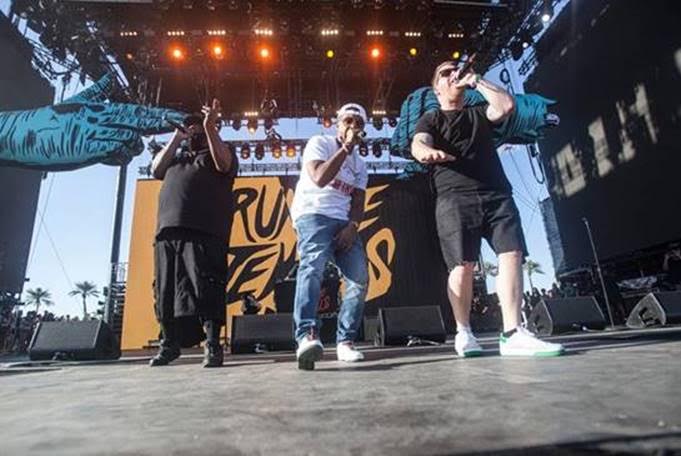 Run The Jewels have followed up their devastating main stage Coachella performance this weekend with the release of the official video for ‘Love Again’ (feat. Gangsta Boo), from their groundbreaking sophomore album, RUN THE JEWELS 2. Produced by JASH and Pulse Films for go90, the Ninian Doff-directed clip pairs beautiful high definition footage of butterflies and bumblebees engaging in colorful floral pollination alongside Killer Mike, El-P, and Gangsta Boo’s playful and provocative sexual lyricism – a nearly NSFW nature mini-documentary.

The duo shared some thoughts on their new video in this interview from the Coachella livestream.

Not only did festival fans get a sneak peak of the video live from main stage, they were also treated to a heartfelt video introduction for RTJ by presidential candidate Sen. Bernie Sanders on the big screens, the debut of a fiery new song from the forthcoming RTJ3 album, plus surprise appearances by Gary Clark Jr., DJ Shadow, legendary rapper Nas, BOOTS, Gangsta Boo, and Despot. The video then made its broadcast premiere on Coachella’s livestream and on free mobile video app go90 immediately following Run The Jewels’ phenomenal set.

Adding to an already big weekend, the group once again participated in Record Store Day, following up last year’s top-selling new RSD release with special Nick Gazin-designed cardboard VRTJ virtual reality viewers, as demonstrated in this video. The viewers help give fans access to the full immersive experience of RTJ’s celebrated new VR video for their song ‘Crown’, (available via the Coachella VR app and The New York Times’ VR app for both iOS and Android). The video is also available in the recently launched HTC Vive headset. The group will be releasing an Art the Jewels virtual art gallery this spring with additional VR content to follow via their forthcoming VRTJ app, and also have a 7-camera VR shoot of their Coachella weekend 1 set in production.

The viewers come paired with a download of the new song ‘Nobody Speak,’ a riotous collaboration with iconic producer DJ Shadow from his new album THE MOUNTAIN WILL FALL, out 24th June on Mass Appeal Records. The song will also be featured in next Sunday’s season premiere of Silicon Valley on HBO.

Run the Jewels hits the desert again on April 23rd for weekend 2 of Coachella, with more surprise guests and a featured broadcast of their set on YouTube’s new live 360 streaming capability, after which they return to the studio to complete their eagerly anticipated 3rd album, RTJ3, due out this Fall.