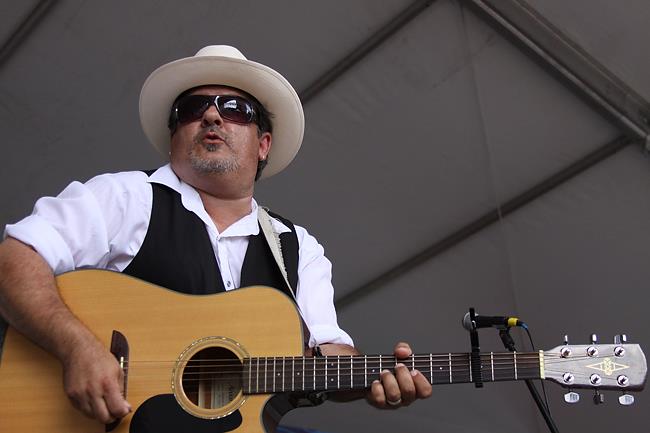 Lafayette, Louisiana native Kevin Sekhani returned to his roots in 2010 after 20 years playing on the Austin, Texas music scene, determined to release his first solo album and combine the influences of two of the best musical regions in the world. He has succeeded in spades with “Day Ain’t Done,” his solo debut due out on Louisiana Red Hot Records. His songwriting was honed from years of collaborations and jam sessions with the legendary wordsmith Bill Carter, who wrote hits for Stevie Ray Vaughan, The Fabulous Thunderbirds, Counting Crows, Waylon Jennings, and others, so the time was right for an album that No Depression called “…one of the best debut albums I’ve heard in years.”

With backing from members of the backing bands of Son Volt, John Mellencamp, and Patty Griffin, it’s layered with Americana staple instrumentation. Taking the earthy tones of violin, mandolin, accordion and acoustic guitars, it exudes the feeling of back porch jam on a Louisiana Saturday night. The album’s track “Oilfield Tan” has found its way into regular rotation on local Louisiana and Texas radio stations, resonating amongst an area all too familiar with the demanding industry of oilfield work.

As a 20 year veteran of the Austin music scene playing in bands like the Radio Thieves and Two Minute Sinatra, Kevin Sekhani has done it all. From blazing rock-n-roll to holy ghost honky tonk in the Mercy Brothers, for years Sekhani has entertained crowds with heartfelt enthusiasm and poignant lyrics. In Austin, Sekhani spent his time working with Michael Ramos (John Mellencamp, Patty Griffin), Andrew Duplantis (Son Volt), and string player extraordinaire Warren Hood. In 2010, Sekhani moved back to his home town of Lafayette, Louisiana to front The Mercy Brothers, a Gospel group walking the fine line of sinners and saints. Since his return home, he has won over the hearts of Jazz Fest and Festival International audiences and landed a top 5 spot on the Americana charts in Europe.