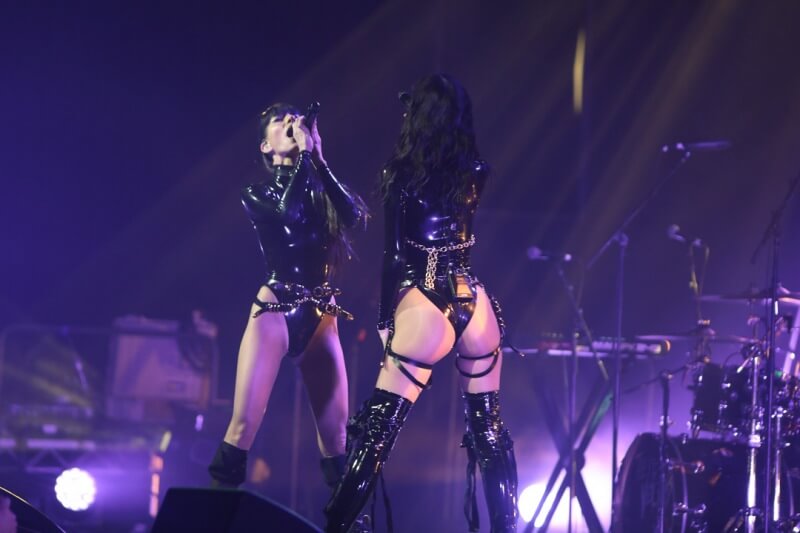 As I walk to the venue tonight and look up the sign reads Hordern Pavilion The Veronicas Friday 18 June SOLD OUT. It’s been close to two years since I’ve been to the iconic Hordern so what better way to return than seeing the beloved twins. The Veronicas are currently touring across Australia for their Godzilla V Human tour and tonight it’s Sydney’s turn to experience the long-awaited show.

Warming up the crowd tonight were indie rocker MAY-A and electro pop newcomer Cxloe who helped get the party started. People then piled into the Hordern in anticipation of what was to come. Green lights shined as The Veronicas appeared at the back of the stage both shooting smoke cannons into the air signalling the beginning of an epic show. The screams from the audience were deafening as the girls kicked things off with their monster new track “Godzilla”. They were wearing similar outfits to the video for the song setting many hearts racing, mine included.

Next up came some old school bangers in the form of “when it all falls apart”, the super catchy “take me on the floor” and “revenge is sweeter”. This was followed by two more new ones “stealing cars” and “silent”. By this time the crowd was well and truly in voice as the gorgeous duo dealt us another hit with “hook me up” . They then played “this is how it feels” before leaving the stage for a quick outfit change.

As the girls reemerged on stage this time it was just them without the band as they began to sing new song “human”. Their beautiful harmonies soared through the entire venue as the song then seamlessly flowed into another ballad “heavily broken”. The pace then quickly picked back up as the girls explained “if you don’t know this song you can leave” as the band played the intro to fan favourite “everything I’m not’. You would’ve guessed the next song by just the sea of red smoke and lights on stage as “in my blood” brought the night cub vibes ahead of the girls leaving the stage again.

The girls strutted back onto the stage wearing pink feathered almost showgirl outfits as they paused to celebrate pride month. They thanked the years of support from the LGBTQ community then performed a sultry version of new song “sugar daddy”. The pink outfits came off as they then gave us “Lolita”.  The girls told us this would be the last song as the guitar played the beginning of “4ever”. The pop punk style track that essentially started their career had the whole place moshing and even started a circle pit.

As the girls left the stage no one in the audience was ready to leave as huge chants for “untouched” started. The twins then returned slowing things down with “you ruin me” as lights from the crowds phones lit up the darkness making for a memorable moment. Then from one memorable moment to another it was time for the song everybody had been waiting for. The girls demanded “Sydney please rise for the national anthem” as “untouched” made the entire room erupt in an energy that only live music can bring. With the song finishing Lisa and Jess in unison said “thank you so much Sydney” leaving the crowd on a high. This was their first national tour in six years and tonight The Veronicas proved they are as popular as ever.