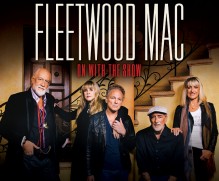 Due to overwhelming ticket demand during the current pre-sale period, the legendary FLEETWOOD MAC have confirmed a second and final show at Hope Estate Winery in the Hunter Valley, when they bring their On With The Show World Tour to Australia and New Zealand in 2015.

The On With The Show Tour will mark Fleetwood Mac’s first series of concert dates in Australia and New Zealand since 2009’s sold-out Unleashed Tour.

Touring as a five-piece for the first time since 1998, one of music’s most enduring groups of all time, Fleetwood Mac, will play a selection of arena, stadium and winery shows this October – November.

The news of Fleetwood Mac’s return is particularly welcomed by Australian and New Zealand fans after the band were unfortunately forced to cancel their sold-out 2013 dates.

The On With The Show Tour will see Fleetwood Mac on stage for close to two and a half hours, showcasing hits and classic songs from their career that spans more than four decades and global album sales in excess of 100 million, including songs such as: “The Chain”, “Dreams”, “Second Hand News”, “Rhiannon”, “Sara”, “Gold Dust Woman”, “Tusk”, “Looking Out for Love”, “Don’t Stop”, “Go Your Own Way”…and the list goes on and on.

Tickets are on sale Now

MT DUNEED ESTATE, GEELONG
SATURDAY NOVEMBER 7
Presented by A Day On The Green