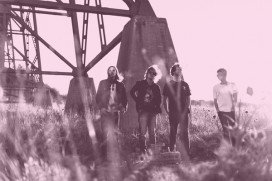 Magic America is a psychedelic rock band consisting of four friends out of Melbourne. Some of which are brothers. Taking their name from Blur’s ‘Magic America’ song and with one hand in the Spacemen 3 bucket and the other in that 90s Brian Jonestown Massacre sound, Magic America stir like mad and come out with their own brand of modern psychedelic rock.

Forming in 2013, Magic America have been honing their hazy blend of folky, psychedelic rock with a combination of steady gigging and studio time. The quartet have recently been flitting between Soundpark Studios and guitarist, Matt Stapleton’s home studio to record their upcoming EP with Dave Turner, which is slated for release in the Spring of 2015.

Their first offering though comes in the form of ‘Comes And Goes’, a track of loneliness, procrastination, boredom and monotony.

With their debut EP ready for release later this year, this psych rock imagining of friends shows no sign of slowing down and are strongly determined to keep pursuing their organic blend of old and new sounds to create something authentic and lasting in a world that can sometimes feel lacking in that department…

Some  rad tunes will be coming from Magic America shortly, but in the meanwhile check them out live!

*tickets available via the venue or on the door