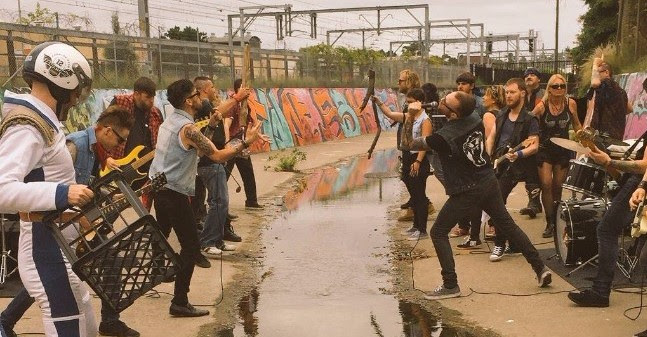 Hot off the ARIA red carpet, Sydney’s Born Lion continue to flex their punk rock muscle with the release of their tough-as-f*ck new video for Rest In Pieces.

Shot in Sydney’s inner-west by the team at Paste Studios, the video features Jesse Coulter from Adelaide band Grenadiers (who provided guest vocals for the track in the studio) as well as cameos from mates in bands like Captives and The Stiffys.

WATCH THE VIDEO FOR ‘REST IN PIECES’ HERE

Rest In Pieces is taken from the Born Lion’s acclaimed debut LP Final Words, which was released in July this year, and subsequently nominated for an ARIA in the Hard Rock/Heavy Metal category.

Hometown fans can help the band celebrate the end of a massive year by heading along to Born Lion’s Xmas extravaganza this Sat Dec 19th at Dicey Riley’s Hotel in Wollongong.