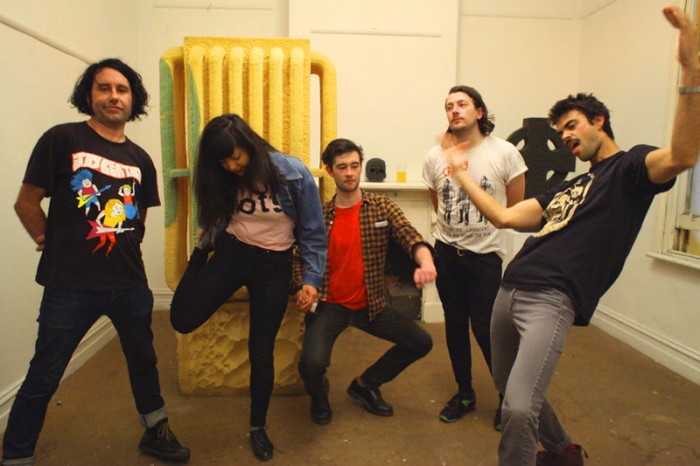 Bad Vision started ripping through basements and venues around Melbourne in 2012, when the chemistry between drummer Matt Radford (Flour, Mutton, amongst others) and guitarist Krystal Maynard (Swim Team, Polo) coalesced with singer Jerome Rush and they finally found their stride with lead guitarist Josh Chugg (Department). It was hard not to get swept up in their youthful exuberance. Their rebellious energy and fearless charisma took them to Europe on the back of a 7-inch and from that, they released their debut, self-titled LP on Adagio 830 Records in 2013.

Unlike being in your late-teens and early twenties – getting cheap-drunk and telling people to get fucked – acquiring a few more years gives you the motivation to do things right, while still perhaps not giving too many fucks. So, while their forthcoming sophomore album, Turn Out Your Socketscomes at the cost of chronological immediacy, the end product packs a few more pounds of punch, contemplatively and sonically with the new addition of bassist, Alex Pink (LOOBS, Swank).

Recorded at Purple Wayne studios in Collingwood by David West in a burst of energy one weekend in January 2015, Turn Out Your Sockets encapsulates a band brimming with pop hooks, razor-sharp chops and a mishmash of garage rock, proto-punk and pop embellishments. It’s the album they always wanted to make.

From the opening burner “Very Melbourne,” Bad Vision demonstrate that they’ve grown upwards and outwards, but not away; while their song writing is more refined, their delivery has stayed as savagely precise. Throughout Turn Out Your Sockets, Rush’s vocal remains supercharged and ready to explode.

It can be tricky to juggle the pop influences with their brash punk love, but it’s a duality Bad Vision embraces, “we wanted to show some variation in the sound” says Maynard, “we’re perpetually torn by our pop leanings and wanting to be a thrashy live punk band.” From the undeniable melodic appeal of “Fairweather” and “Flawless People,” the frenetic drive of “Don’t Don’t,” and the propulsive pop hooks of lead single “Goons,” it’s obvious by the time Turn Out Your Socketscomes to a close, that Bad Vision are unafraid to embrace experimentation in the realisation of their own vision.

Bad Vision’s Turn Out Your Sockets is out May 6th via Adagio 830 Records. The album is available now for pre-order here