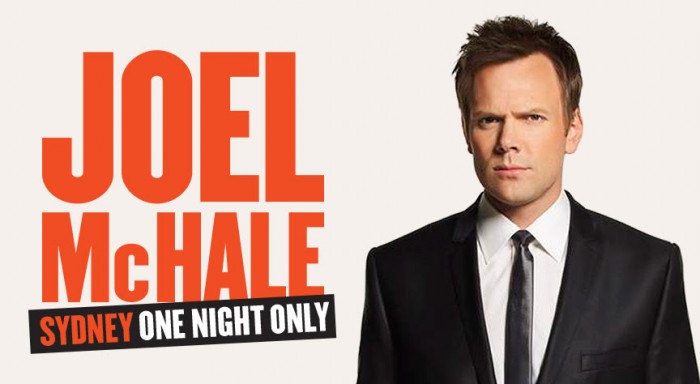 American comedian and actor JOEL McHALE will perform an exclusive, one-night-only show in Sydney in a fortnight’s time.

Joel McHale, who currently stars on hit comedy series Community, and continues to satirise pop culture and current events each week on E!’s The Soup, will perform at the Theatre Royal in Sydney on Saturday November 7. This will be McHale’s only stand up show while here.

Joel McHale is one of the sharpest comic minds and busiest actors in the business right now. As well asCommunity and The Soup, which his quick wit and sharp comedic timing have made into a pop culture phenomenon, McHale starred in 2014’s A Merry Friggin’ Christmas alongside the late Robin Williams.

He has also been seen in the Jerry Bruckheimer-produced supernatural thriller Deliver Us From Evil and appeared in Warner Bros’ romantic comedy Blended alongside Adam Sandler and Drew Barrymore. His additional film credits include Seth MacFarlane’s comedy smash TED, What’s Your Number?, The Big Year, Spy Kids: All The Time in The World and The Informant.

As well as regularly performing his stand up act around the US to sold-out audiences, McHale also headlined the May 2014 White House Correspondents’ Dinner.

Don’t miss this exclusive, once-only opportunity to catch Joel McHale live on-stage on his flying visit to Australia in November.