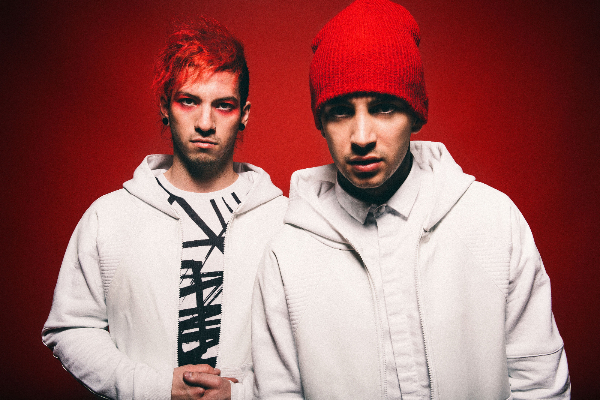 It had been over a year since the dynamic duo Twenty One Pilots rocked Australian shores with their high energy live set when they returned to treat their Aussie fans once again. The atmosphere buzzed with excitement in the crowded main room at The Metro Theatre, Sydney as fans eagerly awaited the band to begin their set after having just watched the support band Little Earthquake. 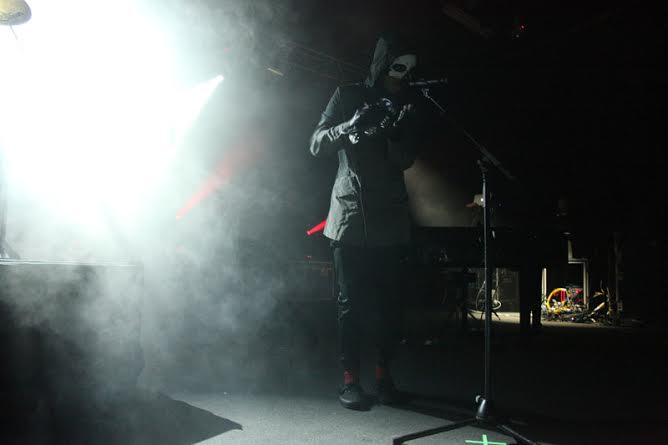 As the music over the speakers quietened and the lights dimmed, fans of all ages screamed in excitement as Tyler Joseph in his skeleton mask and Josh Dun jogged enthusiastically onto the stage and instantly tore into their opening song ‘heavydirtysoul’. Full of fresh energy, Josh Dun drummed with such force it was almost enough to draw attention away from Tyler Joseph who jumped and danced around the entire stage with unbelievable enthusiasm which he mixed up by jamming out with tambourine in hand in the chorus of the song. The lighting was low lit to represent the overall theme of their new album Blurryface, which deals with Tyler’s anxieties. At the end of the song Tyler removed his mask and gave the crowd a stern look before allowing a genuine smile to break out over his face. 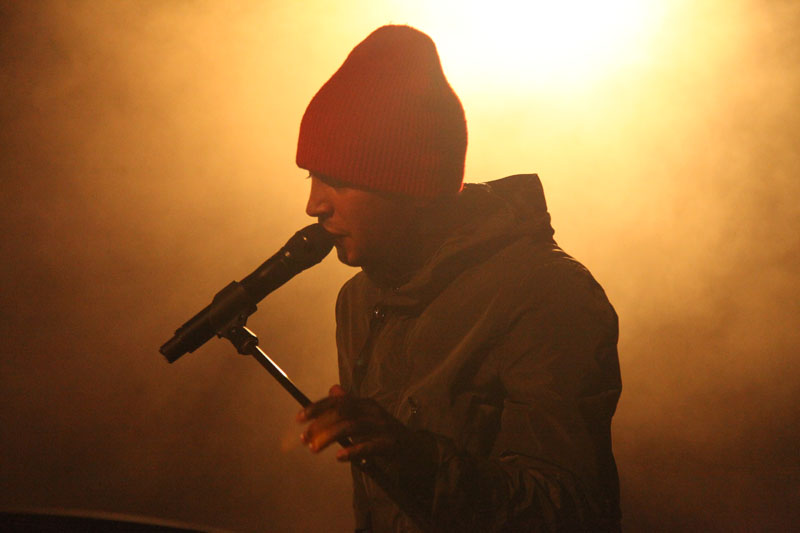 Almost instantly began their next song, ‘Stressed Out’. With two songs performed fresh off their new album, the boys mix things up with a classic Guns For Hands off their breakout album Vessel. This song got the crowd dancing instantly from the first note. In true Vessel style, the lights that complimented this song where red and blue, which sure does seem like a small nod towards the blue in the bands former logo which got eliminated with the release of Blurryface. Keeping with Vessel, the band moved on to play another crowd favourite Migraine. Dun donned the famous simple black balaclava for this number as he continued to drum with infectious energy. 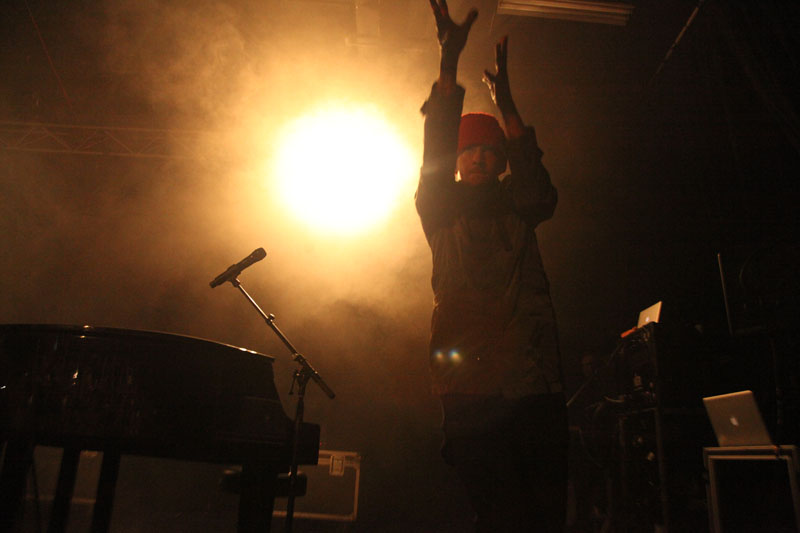 Up until that point it had been song after song with barely a break for the boys to catch their breaths, which was probably much needed when you consider the amount of energy they put into their performances. The lights faded to black before the next track started, a mixture of ‘House of Gold’ which then merged into ‘We Don’t Believe What’s On TV’. For this mashed number, Tyler put on his iconic Blurryface era white Willy Wonka-esque glasses and a floral shirt which complimented this somewhat acoustic number as Joseph strummed aggressively at his ukulele and pumped up the crowd with a chorus of energetic Yeah! Yeah! Yeah!! This song also gave way to Josh Dun to showcase one of his newer talents, playing the trumpet! He stood steadily on his drum stool and played the short sweet notes of the trumpet the song required before sitting down again to resume his highly enthusiastic drumming. This song was shortly followed by ‘The Judge’, which was again performed with an unbelievable amount of energy. If there’s one thing you need to know about the boys in twenty one pilots, it’s that it appears they have an unlimited source of energy. 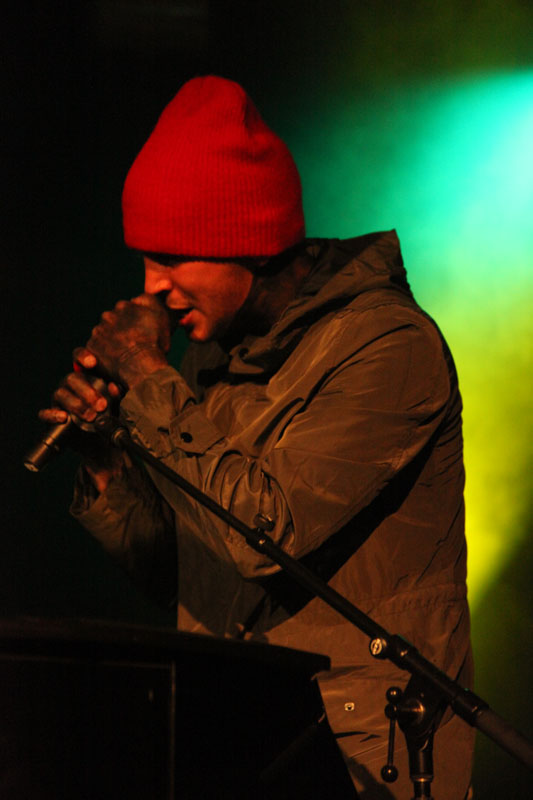 Giving the duo a short time to rest before resuming their set, the crowd launched into a chant of “Tits out for the boys”, which brought no response from either band member… so that chant quickly faded into oblivion as the next song began. ‘Lane Boy’ kicked off with a heavy rhythmic drumming. The drumming in this number was a major standout as Dun smashed through the fast paced drumming that made the whole room dance along to the funky beat as the highly intense drum solo stole the light away from the vocalist. 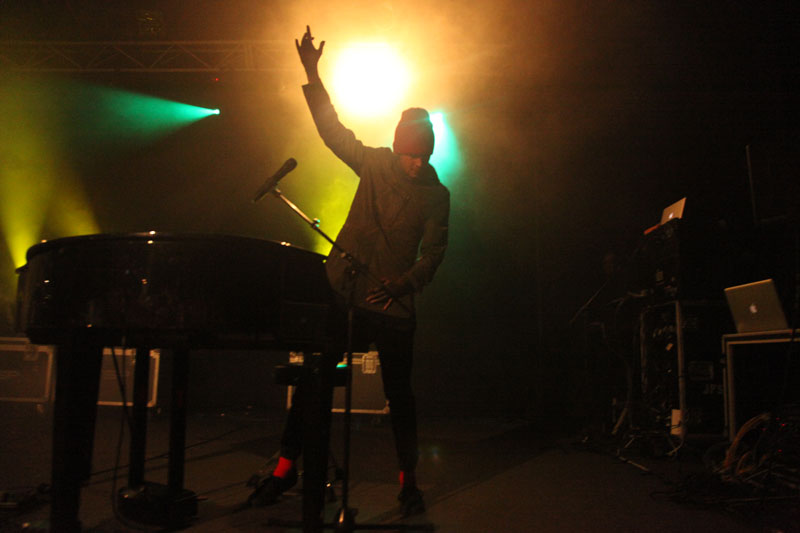 ‘Fairly Local’ brought the duo’s music video to life on stage with the assistance of a glowing microphone dangling from the ceiling which Tyler sang into throughout the entire song. It also brought to life the persona of Blurryface as Tyler sang into a separate microphone that changed his voice into the deeper familiar sound of Blurryface. When the lights flared up after the song, Tyler gave the crowd a good long look as he walked back and forth across the stage staring out into the crowd while shading his eyes with his hand and microphone to allow a better view of the sold out room. 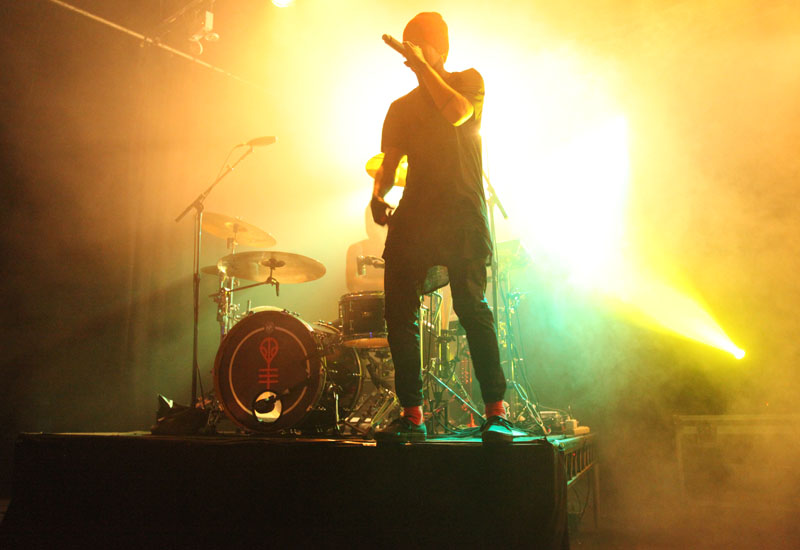 A familiar chord captured my attention immediately as the duo began my personal favourite ‘Holding Onto You’. This one proved to be yet again another crowd favourite as the crowd bopped along to the hip-hop styled raps. In true Josh Dun fashion, he yet again climbed atop of the piano on stage at the height of the song before doing a perfect backflip which caused a giant roar of applause and yelling from the fans who had been expecting it the entire show. 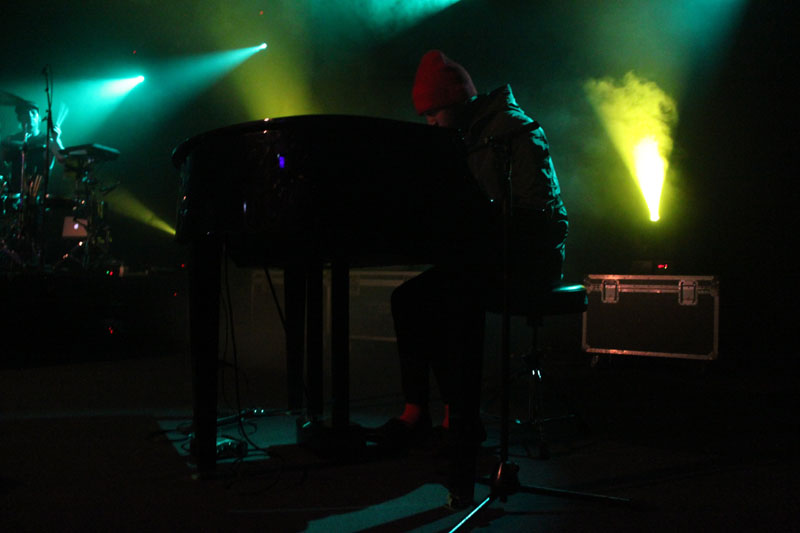 Mixing up the set a little bit, a cover song of ‘No Woman, No Cry’ was performed before they began to play ‘Ride’. The two songs flowed flawlessly into one another and displayed a raw emotion from Tyler as he screamed out some of the words in ‘Ride’ with such emotion and passion that it was hard to draw your attention away from him. In an attempt to engage the crowd, Tyler took a moment to thank the crowd, the support band, and the security guards before instructing the crowd to grab a partner and to climb atop each others shoulders once he gives the signal to do so. Around a fifth of avid fans eagerly prepared and when the time came dozens of people on top of shoulders added a whole new dimension to the constantly dancing crowd. After motioning to the crowd to get off each others shoulders at the end of the song ‘Run and Go’, Tyler once again took a moment to have a chat (presumably to give Josh his well deserved break) and said, “Thank you guys so much! You sold this place out! Give it up for my good friend Joshua!” and “We say this, but we mean it. If you have us, we would absolutely love to come back some time”. Looks like we might be seeing more of twenty one pilots in the future. Once the crowd settled down, ‘Tear In My Heart’ was played and afterwards was matched with a crowd started chant of “Jenna! Jenna! Jenna!” which caused Tyler to laugh and become a little embarrassed as he addressed the crowd with an, “Alright, alright, alright. You went from that one chant you were doing to that one chant
about my wife”. 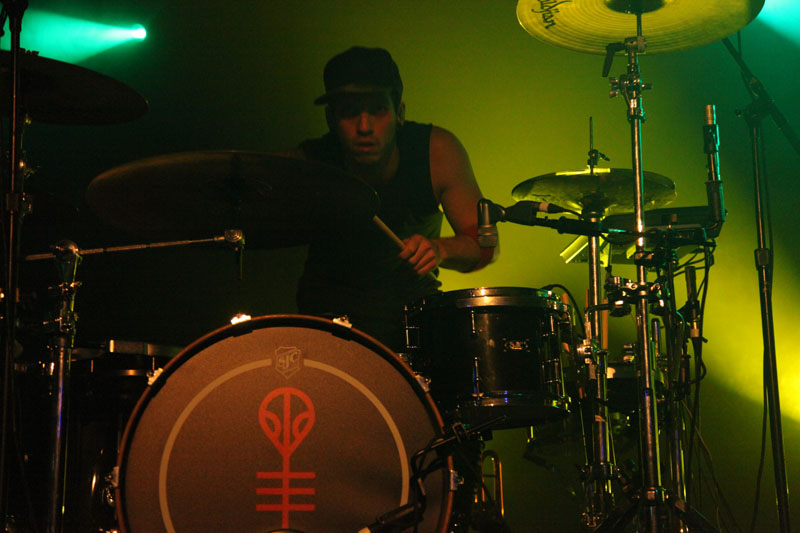 With the show drawing to a close, Tyler took a chance to make this show memorable by “interviewing” one of the barrier security guards. He took it upon himself to single out one guard named Adrian and said that if the security guard where to come up on stage after their next song which would be their final song and started a chant of “one more song” then they might possibly return for another song. Once the crowd laughter and yelling had died down, the duo launched into their most recognisable song to date, ‘Car Radio’. To tease the crowd, Tyler played the single opening note to the song which any devoted fan would instantly recognise. Being their most popular and well known song, it was assumed that the crowd would sing and rap along to every single word. What wasn’t assumed was the amount of emotion and passion that came from the crowd and Tyler throughout the song. This was a perfect closure to a fantastic set. That was until Adrian the security guard got up on stage and started chanting “one more song” along with the crowd. At the peak of the chant, Tyler and Josh dashed back on stage with Tyler joking “Get off the stage. You’re supposed to be protecting, not dancing”. The instrumental to ‘Trees’ began to play but before starting to sing, Tyler yet again addressed the crowd with a heartwarming message of “Thanks for letting us write the music we want to write and say the words we want to say. Thank you so much” and with that the song began. Towards the end of the song the duo jumped off the stage and were aided by security guards onto two boogie boards that were supported by fans which then allowed the pair to drum on a drum each held up by a security guard to end the show on a highly memorable note.

In the end it was a fantastic set full of energy and enthusiasm brought to the fans by a fantastic band composed of two guys who care deeply about their fan base and whose fan base cares about them so much that they literally support them in performing their music by bearing their weight on top of boogie boards. Twenty One Pilots sure are a band to keep an eye on as their unique style continues to draw fans from all over the world.