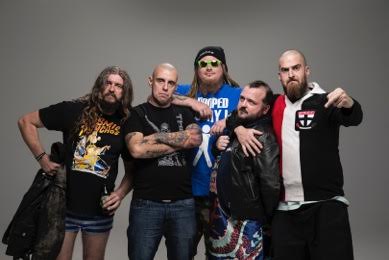 Hot on the trail of their new album Dead Set and a national tour with sold out shows in capital cities around the country, King Parrot are backing things up in true blue collar form with the ‘Regional Rampage’ tour.

The tour will see the band travel the east coast from Hobart to Queensland and everywhere in between – bringing their trademark ferocity, energy and hellraising live show!

Produced by Philip H. Anselmo (Pantera, Down) and Michael Thompson, Dead Set debuted at number 21 on the ARIA Album Chart, one of the highest debuts of any Australian extreme metal band.Leading with 2 brilliant videos for the tracks Like A Rat (featuring Anselmo) and Home Is Where The Gutter Is, the album delivers a sonic assault on the senses, and smashes the difficult second album syndrome out of the park.

King Parrot head to North America in July to tour as main support to reformed hardcore legends Superjoint Ritual. They’ll return to Australia with all guns blazing for the ‘Regional Rampage’ tour in August and September.