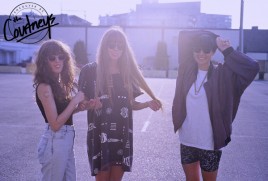 Drifting back to the sound of the early ’90s, while reflecting a fun-in-the-sun West Coast mentality, The Courtneys sound draws comparisons to Sonic Youth, Dinosaur Jr, [early] B-52s, The Clean and Le Tigre. Their nostalgia filled and light-hearted lyrics at times poke fun at greasy-haired ’90s heartthrob, Keanu Reeves or relive teen drama, ‘90210’ and more recently in 1996 sci-fi comedy ‘Mars Attacks’. The band points out “the nostalgia is real. It’s a real appreciation of stuff. It’s not because it’s a joke. It’s because it’s really awesome”.

Bone Soup and Future Popes will release 150 limited edition Australia/New Zealand Tour copies of The Courtneys ‘Lost Boys / Mars Attacks’ 7-inch. Don’t miss your chance to grab a copy at their shows or make sure you really don’t miss out