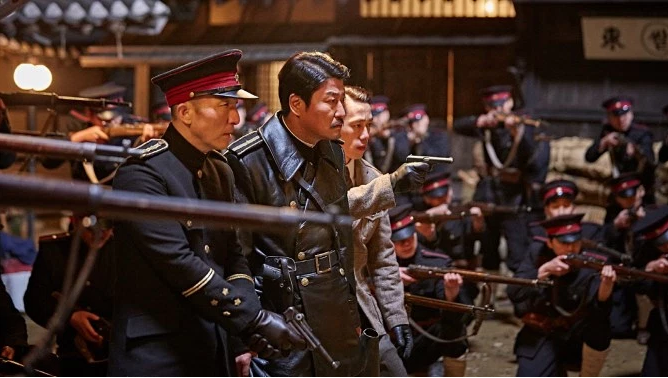 Madman Entertainment is thrilled to be releasing Kim Jee-woon’s The Age of Shadows – screening in Australian cinemas from November 3. Tickets and cinema information available from https://www.madman.com.au/catalogue/view/38269/.

From the director of A Bittersweet Life and I Saw the Devil – the period spy thriller has been a huge success at home in Korea, with a cumulative 52 million USD in 3 weeks, and is South Korea’s official entry into the 2017 Academy Awards.

Korea in the late 1920s is under Japanese occupation. Lee Jung-chool (Song Kang-ho,Snowpiercer), a Korean-born police captain in the Japanese police force, is given a special mission to infiltrate the armed resistance fighting for Korean independence. He approaches Kim Woo-jin (Gong Yoo, Train to Busan), a leader of the resistance to obtain information to expose their activities to the Japanese authorities. Soon Lee begins to doubt his loyalties, and show sympathy for his countrymen.

A resistance plan to obtain explosives in Shanghai that will be used to destroy the Japanese Headquarters in Seoul is set in motion, with Lee caught in the middle. His Japanese bosses suspect his shift in allegiance, and Lee becomes a wanted man. A deadly cat-and-mouse game unfolds in which loyalty is tested and no-one can be trusted.

The Age of Shadows is in Australian cinemas from November 3.

For tickets and more, visit: https://www.madman.com.au/catalogue/view/38269/