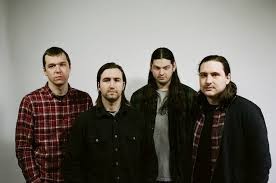 Pennsylvania’s Superheaven has spent the better part of the last five years honing in on their grunge buzzing, dark and desperate sound. Perfecting the talent for writing both heavy and delicately emotional songs, Superheaven are set to release their full-length album Ours Is Chrome via SideOneDummy/Cooking Vinyl Australia on May 8.

Ours Is Chrome is very much about the trials and tribulations of putting everything you’ve got into being in a band and making it work. That’s something Superheaven – completed by guitarist/vocalist Jake Clarke, bassist Joe

Kane and drummer Zack Robbins – know all about. Hard work is engrained in their ethos and plays a big role in
the inspiration for their newest record, Lead single I’ve Been Bored is true to their sound and Under The Gun Review describe it as “Bright, yet still with a done-like delivery, the track swirls in fuzz, distortion, melancholy, melody and more.”

Video directed by Alex Henery (Of Basement and Lloyd Stas) follows the band as they welcome a newfound alien
to Earth by performing their blistering new tune.

Check it out HERE.

Engineer and producer Will Yip’s massive production knocks you on your ass from the very first drum hit and
snarling guitar riff on album opener Sponge. The stadium-sound drums fill the record, plus pulsing bass and walls of buzzsaw guitars are all mixed with the size and clarity of major label grunge breakthrough records like Nirvana’s Nevermind and Smashing Pumpkins’ Siamese Dream.

Ours Is Chrome consists of eleven impassioned, emotionally heavy songs that drift effortlessly between genres
and which channel the band’s insecurities and determination and sees the four-piece turn their feelings inside out to produce a collection of songs that are simultaneously confident and downcast, full of the emptiness of the world yet also resplendent. It’s a soul search, a quest for meaning that, somewhat ironically, is its own answer, its own salvation.

Noisey premiered the new video Next To Nothing where video sees the band settles into the SideOneDummy offices nicely, setting up practices in the parking lot, distro area, toilet, and more when they aren’t drinking all of the milk, ruining records, or just generally being irritating.