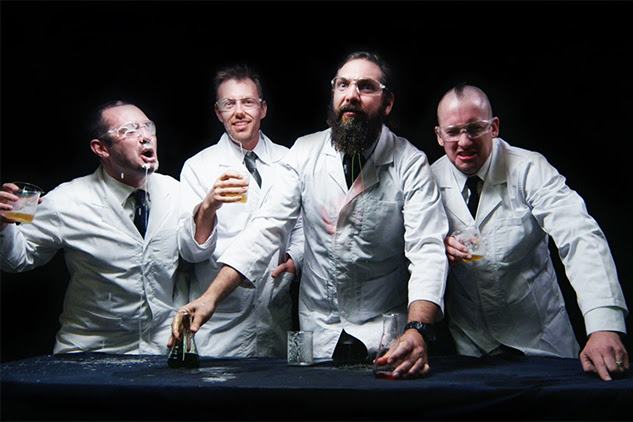 SPITFIRELIAR GET SACRILEGIOUS  IN INSANE NEW VIDEO FOR ‘SCIENCE’

The latest video for brutal Brisbane doom punks Spitfireliar is here and to suggest it’s loose would be a criminal understatement.

Featuring a smoking, skating, masochistic, ginger-haired Jesus who loves ’80s metal wind-milling with his cross, it’s suffice to say that the Brisbane four-piece is  intent on courting controversy with a sledge hammer in their latest clip.

WATCH THE VIDEO FOR ‘SCIENCE’ HERE :

Aside from these gloriously desecrated visuals, the song’s lyrics see front man Mouldy take a pot shot at the ever-raging science vs religion debate, loading as much ideology / idiocracy as he can into a banana clip of just-over-a-minute of destruction.

‘Science’ was recorded and mixed by legendary Brisbane producer Jeff Lovejoy (Powderfinger, The Cruel Sea and Resin Dogs to name a few) and mastered by UE Nastasi (Lamb Of God, Anthrax, AC/DC). It’s the first single from Spitfiarliar’s forthcoming new album that is also being recorded by Lovejoy at Black Box studios in Brissy and planned for release in March, 2016.

Spitfireliar are now poised to unleash the explosive power of ‘Science’ with a show at the Beetle Bar Punkfest X-Mas Bash on December 19 in Brisbane.

In the meantime you can buy a copy of ‘Science’ below, and you can pray for Spitfireliar’s souls at any good local places of worship.

BUY YOUR COPY OF ‘SCIENCE’ HERE: