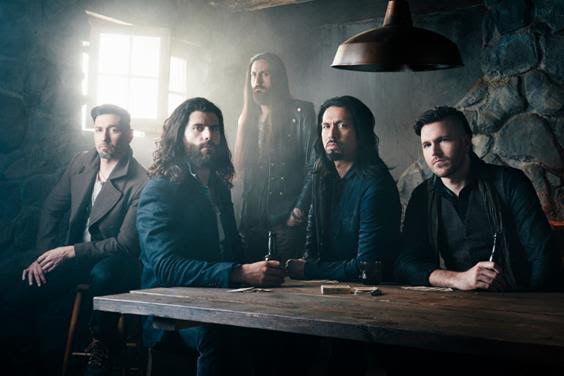 POP EVIL have debuted an all new track from their fourth studio album titled “In Disarray” today. “It definitely has a different musical texture than anything we have previously released,” says front man Leigh Kakaty. “In Disarray” comes on the heels of their highly successful first single “Footsteps,” which was debuted last month and has already cracked the top ten on the Rock Radio Charts. “Footsteps” was officially the band’s fastest charting single to date.

Leigh continues, “There’s something about this song that didn’t make us second guess releasing it as our next instant gratification track. We are humbled by the success so far, and can’t wait to spread the word with these songs with our live show’’

After delivering a performance of a lifetime at Pinkpop Download Festival POP EVIL revealed episode #4 of their behind the scenes studio documentary. he band spent time with producer Adam Kasper (Foo Fighters, Soundgarden, Pearl Jam) in Seattle and captured the experience on camera, giving fans an insight into the creation of their all new LP titled UP, which is becoming their most anticipated release to date.

The band spent time with producer Adam Kasper (Foo Fighters, Soundgarden, Pearl Jam) in Seattle and captured the experience on camera, giving fans an insight into the creation of their all new LP titled UP, which is becoming their most anticipated release to date.

POP EVIL will release UP on August 21st via eOne Music.

Purposefully assembled at Studio Litho, Robert Lang Studios and London Bridge Studios with producer Adam Kasper, UP is the sound of a rock band cementing a powerful identity that’s steadily materialized over the course of three prior full-length slabs. The inspirational soon to be live (June 1st) staple “Footsteps,” POP EVIL prove their burgeoning success is no accident. ‘’Now it’s time to step up our game and let people know we can back it all up,” adds Kakaty. “We want to prove we aren’t a one hit wonder. We didn’t just get lucky.”

UP is a bold reintroduction and step forward, with guitarists NICK FUELLING and DAVEY GRAHS, bassist MATT DIRITO, drummer CHACHI RIOT and LEIGH KAKATY at the top of their game. It’s always a bit cliché, not to mention questionable, when a band says their new album is the best one yet. But in the case of POP EVIL, it’s an absolute fact.