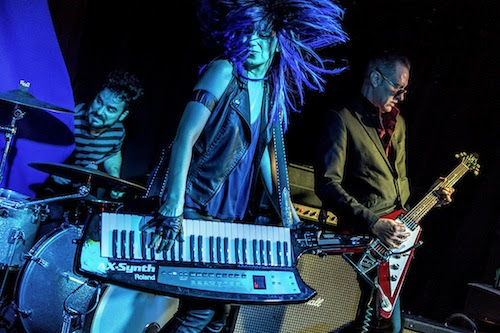 Led by dual singers Christa Collins and Nicole Laurrene, the band’s aesthetic has as much to do with Laurrene’s Michigan rock roots as the surf sounds and pounding percussion of LA’s punk and garage scenes. Rarely does a rock band present with two such well-matched, intense vocalists, but the rest of
Motobunny keep up easily, ripping through songs straight out of a Tarantino film.

Motobunny inked a sponsorship deal with Roland recently and headed into their fantastic studio to film Roland Sessions.
Check out the first video.

Motobunny formed after members of two acclaimed rock bands, The Love Me Nots and The Woolly Bandits got on stage together in 2013. After years of sharing green rooms, tour vans, and seedy motel rooms, it was the first time they had performed as one band and the electricity was undeniable. Together they dashed off songs for a dual-frontwomen rock collaboration, enlisted the help of Love Me Nots drummer Jay Lien, and headed to Detroit to record a full-length album with Jim Diamond (White Stripes, Electric Six, Dirtbombs). Mixed by Bob Hoag (The Format, Dear and The Headlights, Ataris), and mastered by Jason Livermore (Rise Against), the result is 12 tracks of tough rock n’ roll topped off with a girls-just-wanna-have-fun attitude.