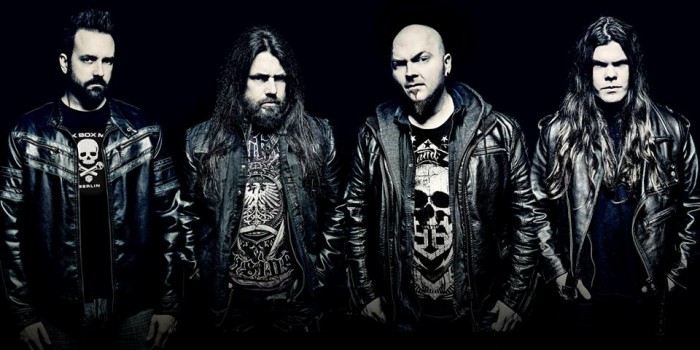 The long awaited debut album from metal titans Meshiaak has been confirmed for August 19 via Mascot Label Group. Made up of power house, seasoned musicians, Meshiaak have delivered a savage and crushing slab of metal the way it used to be done.The twin guitar attack of Danny Camilleri and Dean Wells locked down by bassist Nick Walker and cemented by the heavy hitting drums of Jon Dette (Iced Earth, Slayer, Anthrax and Testament) have created a force de rigueur not seen since metal’s hey day.

In a thrash world gone metalcore, blackened or conversely, NWOBHM-scrappy, Meshiaak have bestowed on the scene an egregiously confident and “old soul” record that evokes the magic of Ride The Lightning, Rust In Peace, South Of Heaven and Burn My Eyes.

The combination of all four players has resulted in a razor sharp, precise, wall of sound that effortlessly dives from the groovy thrash on Chronicle of the Dead to the textured and proggy on At the Edge Of The World. While, It Burns At Both Ends marries, Maiden, Lamb of God & Slayer with world music sophistication in yet another demonstration of the bands songwriting finesse.

Alliance Of Thieves is an album where delicate emotions give way to violent aggression and rage as par for the course. Complex arrangements, epic sweeping passages and astonishing lyrical depth, it’s the kind of album that speaks to people on all different levels,

Vocalist Danny has found himself over the last three years with many moments of doubt, trials and frustration with life experience; the result of his ordeals have been expressed lyrical and the results are passionately painful but cathartic and has allowed him to channel his demons though his venomous tongue.

Despite being filled with endless layers of depth, the songs on Alliance Of Thieves are still effortlessly headbang inducing and good friendly violent fun. And if that’s all you want to take from it, a solid punch in the face metal record that’s fine too but look beyond the riffage and the songs peel away like a metal onion. With the melting pot of influences held with the band members DNA, a little bit of each makes its way to the surface giving the album a truly unique place in the current metal climate.