The Stormrider Heavy Metal Festival is back for another year to celebrate our love of Power, Thrash, Speed, Prog and Traditional Heavy Metal

Now in its third year, the annual festival has grown to become one of the most important key dates on the Australian metal scene calendar.The event has outgrown the Civic Hotel, it’s host venue for the previous two years and will now be held at the Amplifier Bar in Perth.

The epic, Metal Festival will be held on Friday, June 17 and will feature eight of the nations top touring bands, four local Perth acts and four from around the nation. Playing across two stages and kicking off at 8.00pm, it’s a non stop shred fest into the small hours.

Hailing from Tasmania, Taberah are fast becoming one of the nations most sought metal bands. With a string of international supports to their bullet belts and a new EP being launched on the day, all eyes are on the four piece.

Melbourne’s Mason have been going non stop since forming nearly a decade ago and their aggressive attack will infect all who witness it. Adelaide thrashers Hidden Intent have enough downpicked riffage and double kick mayhem to get everybody windmilling! Both bands will be launching new EP’s on the night!

Perth thrash merchants Coldfate play it old school and have a high energy stage show that harks back to the golden age of The Big 4. And taking Stormrider into unknown territory with their blackened thrash attack are the devil’s soldiers themselves, Bloodlust who will be playing their debut show!

Kicking the day off in classic nostalgic retro fashion will be Necromancer who will be playing a set of thrash covers from the all time masters of the genre. 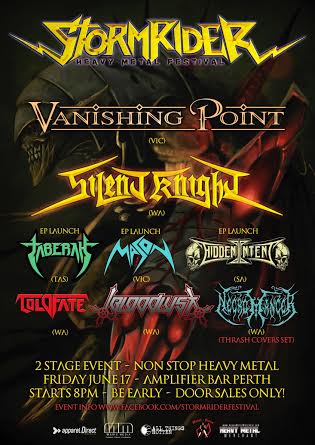