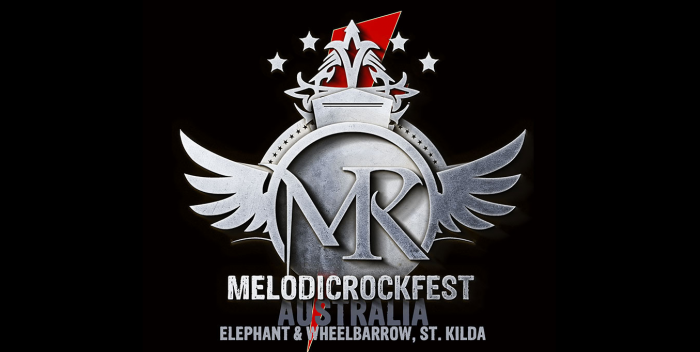 After 4 successful events in the USA, Australian website and record label MelodicRock.com is bringing the popular MelodicRockFest event home. MelodicRockFest Australia will make its local debut in Melbourne on May 13 and 14, 2016 at the Elephant & Wheelbarrow in St. Kilda, Victoria

For nearly 20 years now, MelodicRock.com has been covering the movements of the best melodic and hard rock acts from all over the world. From chart topping stadium fillers to independent studio projects, the site covers all the legends of the rock world, while placing a strong emphasis on new and upcoming artists plus the labels and people behind them.

This is a festival demanded by the loyal local fans. It’s a one of a kind. It’s small, it’s intimate and it’s for those that recall the glory days of Adult Orientated Rock.

ECLIPSE (Sweden)
Eclipse are one of Sweden’s premiere melodic hard rock acts. They boast a strong following across all of Europe and are sought after session musicians when not touring. In 2015 the band released their critically acclaimed 5th studio album ‘Armageddonize’ and just recently were invited to participate in the Swedish heats for the 2016 Eurovision Song Contest. This will be the band’s first trip down under and they plan on making the most of it by delivering a blistering set that won’t be soon forgotten.

ERIK GRONWALL (Sweden)(Special Guest)
Erik is the energetic frontman for one of Europe’s most in-demand rock bands, H.E.A.T. The band will be looking to hit Australia next tour, but for now, their popular frontman is making his own way down under to sample some local brews, hang out with fans and join Eclipse on stage for an extended encore that is sure to bring the house down! Erik will also deliver an exclusive acoustic set for VIP ticket holders on the Friday afternoon.

PAUL LAINE (Canada)
Paul Laine has a career spanning over 25 years, starting off in the Vancouver rock scene, before signing with Elektra Records for his major label debut ‘Stick It In Your Ear’, an album produced by the legendary Bruce Fairbairn.  In 1995 Paul joined American rock band Danger Danger as their new frontman for a 4 album run. His other projects include Shugaazer and Andersen Readman Laine, plus his currently touring country rock band Dark Horse. Paul will perform a true best of set, featuring favourites from Danger Danger as well as all aspects of his career. This will be Paul’s second trip down under.

MITCH MALLOY (USA)
Mitch Malloy was already making waves in the late 80s but for AOR fans he burst onto the scene in 1992 with a debut album for RCA which immediately became a classic.  Since then he’s recorded another 8 studio albums and toured worldwide. He continues to record and perform and is an in demand producer in Nashville. This will be Mitch’s first trip to Australia and will see him deliver a high energy set featuring his hits and classic album cuts, backed by a powerhouse band.

BB STEAL (Adelaide)
BB Steal are legends of the Australian melodic rock scene. Their major label debut was produced by Def Leppard’s Phil Collen and the band has often been touted as the “new” Def Leppard due to their layered, anthemic sound. This will be their first Melbourne show in many years and will also feature permanent member, vocalist Craig Csongrady and the return of original guitarist Kevin Pratt!  Expect the band to deliver a set heavy with tracks from their cult debut album as well as a few from 2013’s comeback album ‘Resurrection’.

WHITE WIDDOW (Melbourne)
White Widdow are the torch bearers for the classic 80s keyboard driven AOR sound here in Australia.
The band are regulars on the Melbourne rock circuit and will deliver a set featuring tracks from their first three albums and their soon to be recorded fourth studio opus.

THE RADIO SUN (Melbourne)
The Radio Sun are fast becoming Australia’s harmony kings, with two highly acclaimed albums now available, both filled with classic harmony driven AOR.  The guys have also doubled as Paul Laine’s backing band for the last few years, appearing with him at events in USA as well as here in Australia. Expect a great set of song from the two albums and a few surprises too.

SERPENTINE SKY (Melbourne)
Releasing their debut album 20 years after originally forming, Serpentine Sky are looking to make up for lost time and will blow fans away with their energy and the highly addictive songs from their recently released debut.

TEARGAS (Melbourne)
Teargas are back together after a 10 year hiatus. Last seen acting as Jeff Scott Soto’s support act for his 2004 OZ tour, the Melbourne lads are ready to kick it back into high gear and will open the main day with the energy of a headliner.

KAATO (Sydney)
Just who is Kaato? You won’t forget them after this show. Get ready to hear the band’s debut album, which is currently being completed with producer and guitarist…..

VANISHING POINT (Melbourne)
Melbourne’s own melodic metal heroes are excited to take part in this event. Without doubt, the heaviest band of the festival, but for this occasion the guys are going to delve into their back catalogue for some more melodic numbers alongside their most epic tracks.

TONK (Canberra)
Tonk take the hard rock back to the glory days of the American Sunset Strip. They have a groove and an attitude Guns N Roses would be proud of. Another rarity to have the band playing in Melbourne.

BLACK MAJESTY (Exclusive Acoustic Set)
An Australian exclusive! The Black Majesty guys have never played an acoustic set in their home country, so expect them to deliver something very special.

THE RADIO SUN (Acoustic Set)
Kicking off the event is one of the hardest working bands this weekend. The band will be promoting their upcoming acoustic project. 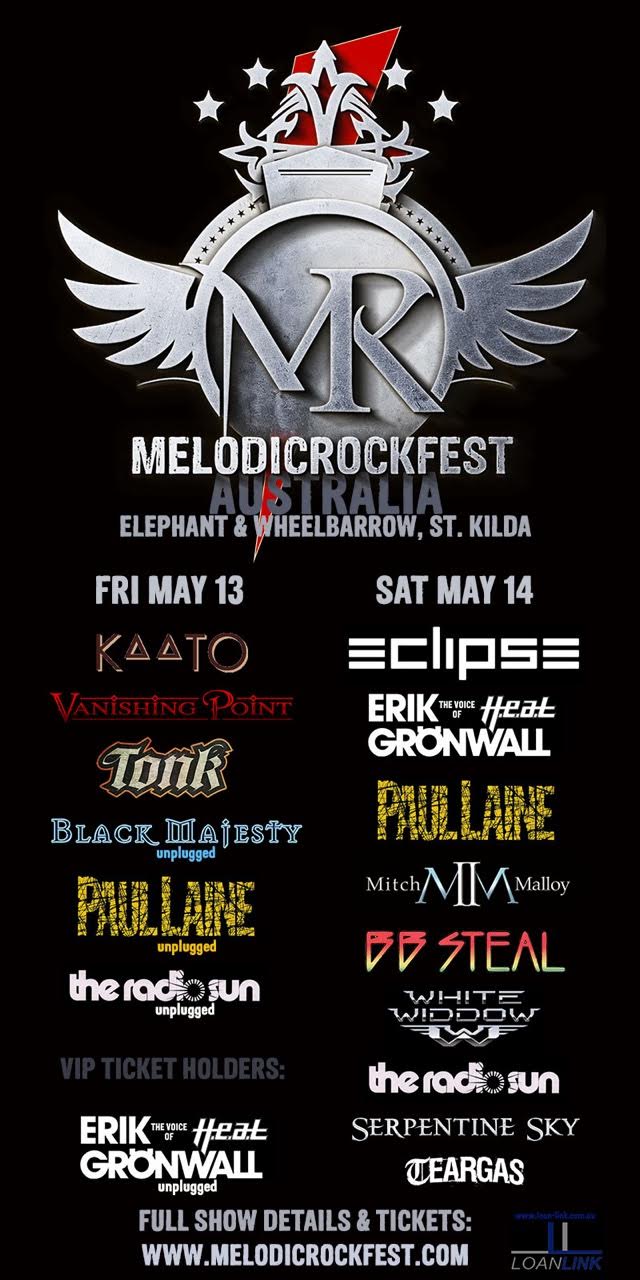