On Friday, June 3rd, HELLYEAH unleashed “UNDEN!ABLE” to the world and achieved a USA debut at #1 on the Independent Current Chart and #2 on the Billboard Rock/Metal Chart!

UNDEN!ABLE has taken the hard rock and metal community by storm. Selling over 20k copies in its first week, HELLYEAH’s mixture of ferocious guitar riffs, biting lyrics addictive hooks have fans and media captivated. Connecting globally, the album debuted at #20 in the Australian ARIA album chart and #2 on the Rock Chart in Canada.

‘UNDEN!ABLE’s first single “Human” is still climbing the charts after 16 weeks – currently #10 – on the Mediabase Active Rock Chart as HELLYEAH’s cover of Phil Collins classic “I Don’t Care Anymore” is catching fire with the metal community. In an in-depth interview with Rolling Stone, vocalist Chad Gray and drummer Vinnie Paul give the first recap of how the song evolved in the studio at the end of recording sessions. “I Don’t Care Anymore” is sitting at #2 on the iTunes Heavy Metal Chart since it was made available for download on album release. 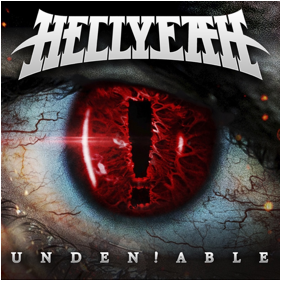