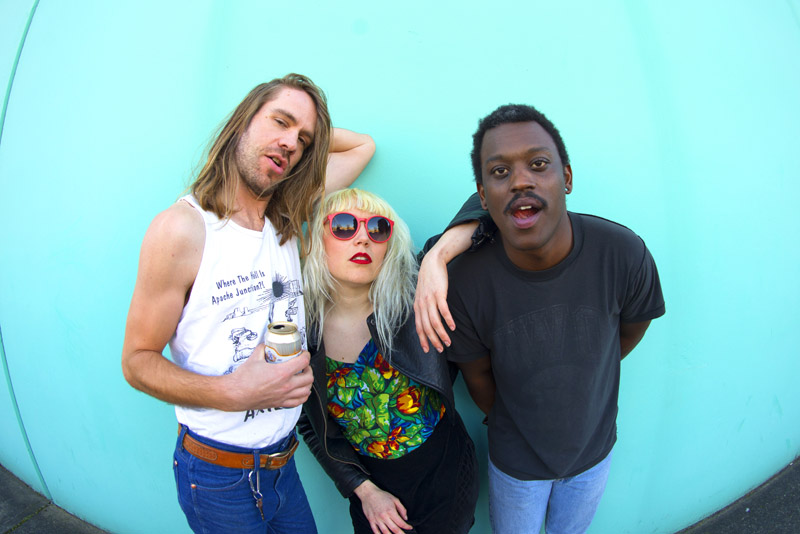 Guantanamo Baywatch will unleash their bawdy mishmash of classic surf instrumentation and brash garage rock upon Australia for the first time ever this April, as they continue their tradition of filtering AM radio rock n’ roll, surf, and rockabilly through a layer of punk sleaze, into a ribald and frenzied ruckus.

Their live shows burst with the good times and a raw renegade energy that’s far more important than an authentic augmented 7th. This wild Portland trio have drawn comparisons to garage revival pioneers The Gories, The Sonics and The Mummies. Guitarist and vocalist Jason Powell gives a nod toward the 60s, with Dick Dale inspired guitar licks and a primitive blown out strut, Chevelle Wiseman shreds on bass and Chris Scott‘s super tight drums chop, barrel and roll, evoking the finest breaks in the Pacific North West. Guantanamo Baywatch play legit surf rock, with a healthy amount of “I don’t give a shit” ‘tude.

This trio is weird. But hell, it’s a good weird.

Their tight backbone that still hangs loose, paired with reverb-drenched guitar pickings stolen from flamenco and surf rock, and a distinct growling vocal which resembles ex-label mate, Shannon Shaw (of Shannon & The Clams) is just too good to resist.

There’s a bucket load of influences worn on Guantanamo Baywatch’s shirts, from Detroit garage, 50s rockabilly, the Cramps, The Sonics and so on. But who gives a shit about reference points anyways? Every artist has ‘em. And that’s what’s so good about them; the trio fuck with various subgenres, from dusty Western twangs, to the straight-outta-Sun Studios rockers.

It’s Guantanamo Baywatch’s loose swagger and debauchery which has gained great attention across The USA and found them on numerous slots for cult indie label Burger Records’ fistful of festivals including Burgerama, Burger Boogaloo and Hangover Festival. They’ve also featured on some killer split 7-inches with the likes of Shannon & The Clams and Natural Child – both must haves!