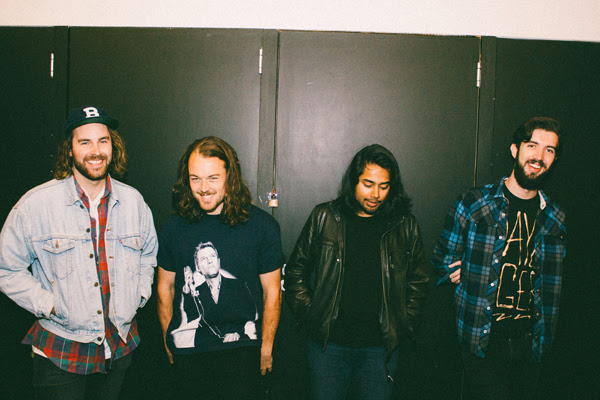 Melbourne’s scuzzy DIY punks, Going Swimming have been busy recording their debut LP over the past year, whilst taking stops to travel and gig, the product being Deadtime Stories; an album completely self recorded and self-released. So, to celebrate the long drawn out process, they’re going on an extensive tour to make the most of what they really love doing; playing live shows.

The debut album, Deadtime Stories unfurls like a punk rock version of a Goosebumps novel, lifted with the air of uncertainty, whilst confusing the steps of adulthood. Leggatt’s raw howling vocal, equal parts longing and hopeful, carries through with damning drums and surf-rock guitar solos.

It’s their live shows which have earned them their local stripes though, dominated by their sharp interplay between punchy bass lines and surf-beat drums, all washed in a river of snarling melodies delivered from Leggatt. These riotous shows have led to opening gigs for internationals including White Fang and Guantanamo Baywatch.

Deadtime Stories manages to capture Going Swimming’s carefree chaos; yet never collapse into all-out shambles. Opening cut, ‘Them Shakes’ is a anxiety riddled surf-beat track which laments their affinity to gutter-loving muses of Black Lips, Bass Drum of Death, Dune Rats and the like.

While tracks like southern sounding rock ‘n’ roll heaters, ‘Your Sister’ and ‘RCB’ materialize into howling surf-rock sock hops; reverbed guitars, bass and drums fold in upon each other like cresting waves at Malibu.

These ingredients carry through into the instrumental ‘Yoko, Oh No!’. ‘Together (To-Get-Her)’ is a bonafide tale of romantic debauchery, while ‘Hooligan’ and ‘Cosmonauts and Crosses’ ends the album on a note of weary, but insistent defiance.

tickets available on the door, unless specified
for all tour details head over here
# Supporting White Fang