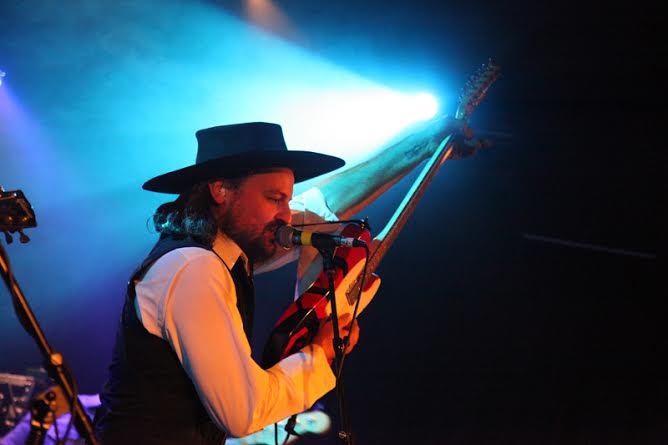 It’s been 10 years since The Matches released Decomposer and to celebrate they played  a few shows on the east coast. Decomposer was the album that saw the band take what some called a vast departure from there first albums sound and into a more avant-garde and art rock sound.

I can remember when I had Decomposer on hi rotation and whilst it doesn’t get the kind air play from me as it once did (thats not to say i still don’t hold this album in hi regard because i do). I now know just by looking around the Oxford Art Factory in Sydney on this Sunday evening, i am not alone in my feelings of appreciation for this 2006 masterpiece.

Before i get into how good the set was can i just give props to lead singer Shawn and guitarist Jonathan for keeping up there unique sense of fashion and style that they are known for. Sean in his vest and cool ass Stetson Mexican style cowboy hat and Jonathan in his blue suit with little flower pics all over it and underneath a shirt with pictures of Toucans scattered all around it. (for a better visual check out our gallery)

Moving on from the fashion and getting into the music side of things, i can definitely tell you it was great and you suck if you didn’t go for any other reason then life threatening illness. Album shows when played as they appear on the release are the best no jumping from track 1 to track 10 then back to tracks 2,3,4 or leave out track 8 because it sucked. No you made a work of art and came on tour to play an album show then you should play it from start to finish no compromising and thats exactly what the Matches did and they did it so flawlessly and all the while with smiles on there faces you could see just how much fun they were having and we were too, there was excitement in the air the whole night.

Opening with Salty eyes we stared to bounce around getting warmed up on Papercut Skin we really got things going as we moved in moved out and sang ‘Olly Olly oxen free‘ after the song Sean asked us to calm down saying ‘its only track three your going to want to compose yourself‘ to which Jonathan added ‘yea you don’t wana decompose yourself‘ we all laughed the humorous banter would continue throughout the set, Sean telling us the reasoning behind it all is that after rallying thru there set in Melbourne track 1 -13 no breaks it had them all realising there age and how that playing style is exhausting so they decided to use more banter between songs and considering the age of there fans as well lol. Little Maggots was another track that got us all charged up despite our old age and also one of my favourite tracks from Decomposer What Katie Said was another crowd pleaser, My Soft Deep was dedicated to David Bowie and Shoot Me In The Smile had us all sing out ‘Shoot Me, Shoot ME, Shoot Me’.

There comes a point where every cd must end as for they only hold 700mb of data says guitarist Jonathan. Now if you know the album then you know it ends with The Barber’s Unhappiness, this dark almost brooding track may sound like a great way to finish off the album but this has been a fantastic live music performance and we want something more and we get it. Straight away the band come back out on stage and before they get things started Shawn warns us ‘that if you don’t wana get hurt then move‘ as for once the music starts he launches himself into the crowd surfs makes it back to the stage with it missing a word. They play a six song encore of hits from there past and present. But as usual Sydney decides to give it there all on the very last song which is Sick Little Suicide and if things weren’t already crazy enough the band bring up any and all who could fit on stage with them as Sean enters the crowd and finishes off the set from the mosh. It was a magical finishing touch to what had been a great set and fantastic tour.