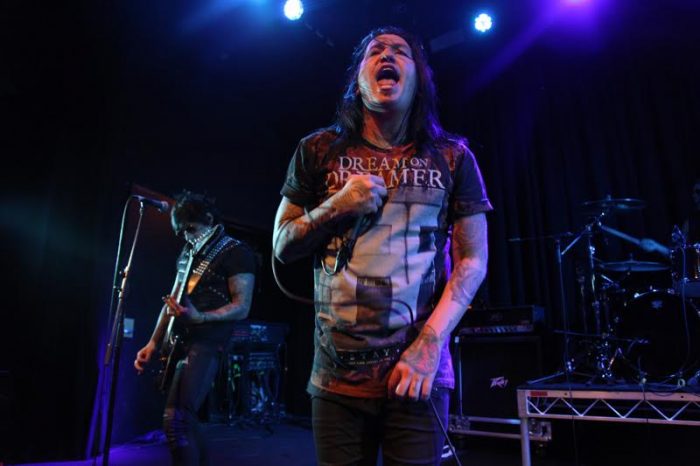 Escape The Fate have been around now for over 10 years and have managed to keep at it amidst various line up changes. They rode the emo/screamo wave of mid 2000’s to take on more of a hard rock and metalcore sound these days. The last time the ETF boys were on Australian shores was part of the now deceased Soundwave tour. Also while here they did some Bury the Hatchet sidewaves with Falling In Reverse.

Now that Soundwave is gone the only way to see bands like Escape The Fate is to catch them on headlining tours. On this cool spring Thursday night it was Sydney’s turn to show their appreciation for ETF making it back down under. As the venue started to fill up with a sea of black shirts the bar lines grew and the crowd got rowdy.

First up on stage was Sienna Skies local Sydney boys and now veterans of the scene. Their stage presence was evident from the first guitar riff as they won over new fans with each song. Having toured previously with other international acts these guys were a perfect fit and showed no sign of nerves on stage. Looking forward to catching these guys again once their new album drops.

After a short break next up was the mighty Dream On Dreamer. Apart from some technical lighting issues the band provided a tight thunderous set. The contrasting vocals between Marcel and Zach work perfectly live. By now the crowd had also grown substantially with many singing along to every word.

As the curtain was drawn on stage and more drinks were consumed by the eager crowd the moment had finally come for Escape The Fate to take the stage. They burst onstage stage furiously to a glow of red and purple light. Kicking of with “just a memory” the opening track from their newest album. Craig had the crowd in the palm of his hand immediately as they would sing along in full voice. Guitarist’s TJ and Thrasher had plenty of American swagger to them as they would rip through countless solos.

The set itself featured a mix of songs throughout ETF’s career including many fan favourites like “the flood”, “Ashley” and “10 miles wide”. Every song sounded impressive live which shows that these road warriors known their craft. Craig’s vocals were impressive and helped to reinforce how incredible they are live.

A surprise track in the set came from a cover of My Chemical Romance’s song “Dead”. Whilst they did stay close to the original with the cover it sounded great and was nice to see them covering another band from the mid 2000’s emo scene. The set finished with old school crowd favourite “situations” and sure this song was originally done by Ronnie it sounds just as good with Craig and the crowd loves every minute of it.

So whatever the latest music fashion is these days and now that the word emo is synonymous with nostalgia Escape The Fate have managed to remain relevant. It was great to see Sydney new younger ETF fans combined with older fans who loved their earlier songs. Craig and the boys genuinely looked like they loved being on stage and the Sydney Australia crowd was grateful for their return.