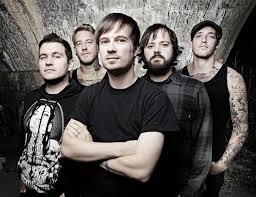 Funeral For A Friend will soon be back in Australia for a tour not to be missed!
Welsh quintet and powerhouse Funeral For A Friend return to our shores this April following the release of their latest opus ‘Chapter and Verse’.   Funeral For A Friend are veterans in many ways, but fourteen years after their formation the band still packs as much punch and purpose as they started with, if not more.
Chapter and Verse is the band’s seventh full-length record and a natural follow-on from the confidence and conviction displayed on previous album Conduit.
One of the most sonically diverse records the group has ever made, Chapter and Verse features everything from discordant riffs and relentless blast-beats to the kind of lines you would expect from bands like Sunny Day Real Estate. Funeral’s trademark gruff attitude is juxtaposed against unapologetic political lyrical content, which ranges from wealth inequality to feminism.
12 years on from their impressive debut, Casually Dressed & Deep In Conversation the band has become an ever-present force through regular releases and relentless touring. April sees the band embark on their 7th trip to Australia to perform songs from the new album plus favourites from their remarkable career.
Anyone that has witnessed Funeral For A Friend live can attest the band leaves nothing on the stage.   Joining the tour will be young Sydney hardcore quartet Vices.  Having recently released their sophomore release ‘We’ll Make It Through This’ and touring nationally with Counterparts, Vices are blazing a trail for ‘east coast feels’ hardcore with an unwavering commitment to hard-hitting songwriting and an unmissable live show.
Dates below – 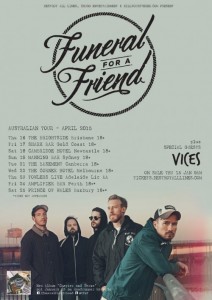