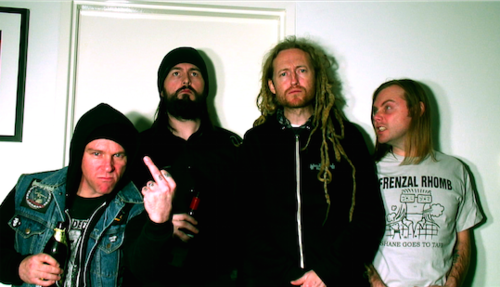 Turning 25 is the best. You’ve finished uni, married the opposite-sex partner of your dreams, and now Dad & Mum are gonna help you buy that second investment property in Waterloo once the housing commission flats finally get bulldozed. It’s a fun age.

Of course if you’re Frenzal Rhomb it also means you’ve spent the last two and a half decades annoying people with music in almost every continent in the world, released eight “chart-appearing” albums and still pay rent. But that doesn’t mean you can’t have party! And Frenzal Rhomb are celebrating in traditional Silver Jubilee fashion: by repackaging a bunch of their old songs into a BRAND NEW RECORD, and then taking it on the road!

“We Lived Like Kings (We Did Anything We Wanted)” is a BRAND NEW ALBUM full of old Frenzal Rhomb songs spanning their illustrious 25 year career, and is being released on CD, as both legal AND illegal download, and in very fancy GATEFOLD DOUBLE VINYL! All the hits are there, even a song from THAT album. You know the one.

Frenzal Rhomb have personally curated every song on the album and it was mastered by Bill Stevenson (Descendents, Black Flag) at Blasting Room studios purely so we could write it in this press release, and now they want to play them all for you.

But for this tour, they’re turning the power of the setlist over to you, with a bunch of “by-request” shows all over our wide brown land (except for the parts they can’t afford to go to). That means YOU choose the setlist, and THEY play exactly what you want them to (within a few very strict parameters).

We Lived Like Kings (We Did Anything We Wanted)” – The Best of Frenzal Rhomb, now available to pre-order http://bit.ly/FRENZALSTORE

CD and Digital out NOW, 2LP out September 30.

Supports are now confirmed for Frenzal Rhomb’s shows in Sept/Oct! Details below.

Plus Hostile Objects and Skinpin

Plus Crisis Alert and Thrashboard