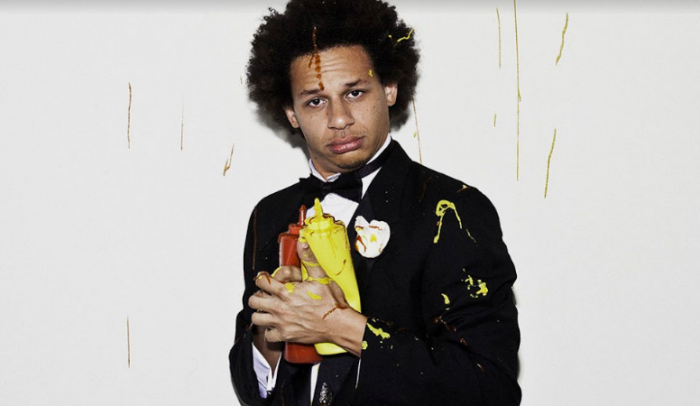 He’s made Tyler The Creator cry, de-loused Jimmy Kimmel, exposed himself to Seth Rogen, covered Ariel Pink in toilet water and is never allowed to speak to Lauren Conrad again.

Boundary-pushing comedian and the world’s most unstable talk show host Eric Andre has been perplexing and provoking audiences with the late night cult hit The Eric Andre Showsince 2012; but he’s been bringing the laughs long before then with his daring and inventive approach to stand-up.

Every bit as uproarious as he is bizarre, Andre’s unyielding enthusiasm, infectious energy and surrealist humour have him consistently selling out venues across the US and Canada.

Eric is currently back on the air for season four of Adult Swim’s top-rated show, with the help of his long-time friend and profoundly apathetic co-host Hannibal Buress, and a never-ending list of huge guests such as A$AP Rocky, Jack Black, Kelly Osbourne, Amber Rose, T.I,Chris Rock, Jimmy Kimmel, Seth Rogen, Andy Samberg, Lauren Conrad, among others.

With his outlandish and hilarious behaviour always on full display, Andre continues to amuse fans onscreen and off with his irreverent sense of humour. Don’t miss your chance to catch Eric Andre perform live in Australia for the very first time this December – who knows what will happen.

General public on sale from Thu 6 Oct
10am local time