DEVIL YOU KNOW, the creative musical endeavour between vocalist Howard Jones (ex-KILLSWITCH ENGAGE), guitarist Francesco Artusato (ALL SHALL PERISH), and drummer John Sankey (DEVOLVED), have proudly partnered up with The You Rock Foundation to premiere the official lyric video created by John Rockovich for the track “As Bright As The Darkness,” which can be viewed on the Nuclear Blast YouTube channel:

“The moment I heard the music for ‘’As Bright As The Darkness,’’ I knew what I was going to write,” states DEVIL YOU KNOW vocalist & lyricist Howard Jones. “This song is about the times I felt at my lowest. I’ve been fighting depression for years and I wish I had not waited so long to get help. Those who know depression, you are not alone. Just reach out.”

The You Rock Foundation aims to serve as a safe haven for those who have suffered from or are currently suffering from depression – the largest perpetrator of suicide, which is the third leading cause of death among young adults aged fifteen to twenty-four. Using music as a backdrop to spread awareness, educate, and empower, the foundation seeks to pull those suffering out of the dark and show them the possibilities of moving forward with a life that thrives. Visit them at www.yourockfoundation.org.

DEVIL YOU KNOW drummer John Sankey adds:
“We are very honoured that we can use our music to join forces with The You Rock Foundation to send such an important and positive message.”

‘’Depression & Anxiety is rampant in the Music industry and awareness needs to be brought to the forefront. A lot of people feel they are alone and we need to let them know that they can get help. They don’t need to suffer anymore.’’

“As Bright As The Darkness” comes off The Beauty Of Destruction debut album by DEVIL YOU KNOW, which was produced by Logan Mader (5 FINGER DEATH PUNCH, GOJIRA), mixed by acclaimed producer/mixer Chris “Zeuss” Harris (HATEBREED, CHELSEA GRIN), and graced with artwork by Travis Smith (OPETH, DEVIN TOWNSEND). The album was released in 2014 via Nuclear Blast Entertainment. 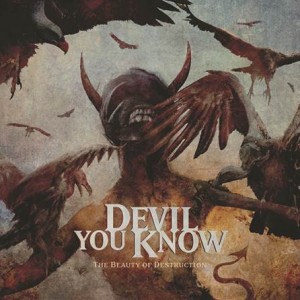