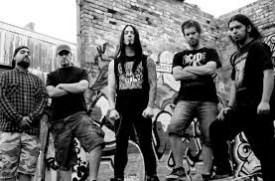 Decimatus hail from Melbourne, Australia. Their energetic and brutal approach to riff heavy groove metal has brought them to the edge of national and international acclaim.

Their sound can be likened to a modern hybrid of Testament, Pantera and Lamb Of God which makes for a seriously frenetic and exciting live show which is what the band are renowned for. With an instantly commanding stage presence, balls to the wall production and menacing, in your face all out attack, a Decimatus gig demands your full attention.

Releasing their debut EP ‘The Betrayer’ in early 2012, the band quickly began filling rooms around their home city and the EP received rave reviews from metal and general music press alike. By mid 2012, the band were on the rise. They unleashed their second EP ‘II’ and embarked on a national tour which included several festival dates and they appeared in Australia’s Heavy Magazine and the UK’s Terrorizer.

In 2013 Decimatus underwent member changes, signed to Donarus Management in the US and got to work recording their debut album, the one you’re about to listen to. Catalyst For Rage was recorded at Legion Studios with Julian Renzo both producing and engineering (Scar The Surface, Jack The Stripper, Hallower, Declaration) A single launch for lead track ‘Usurper’ at Melbourne’s Bendigo Hotel in November 2014 pushed the venue to capacity and has set the tone for what is about to follow.

Decimatus unleash Catalyst For Rage on January 31 and will soon support the release with a full national tour with international dates being locked in for later in the year.