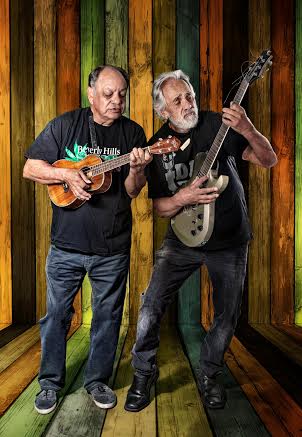 From outsider cult heroes to beloved counter- culture royalty, Cheech & Chong have blazed a smokey trail across four decades becoming one of the most loved and identifiable comedic duos of our time. Defining an era with their hilariously irreverent, no-holds-barred comedy, they released their all-time classic movie Up In Smoke in 1978, it became the most successful comedy movie of its time grossing in excess of 100 million dollars, cementing the loveable duo’s position as totems of alternative culture.

This June KillRockStar Big Dog Entertainment present Cheech & Chong: Up In Smoke The Greatest Hits Tour spreading a contact high across Australia, turning fans on with all the greatest hits, movies moments and musical antics that have seen Cheech & Chong become a part of the very fabric of modern consciousness.

Big Bambu, their second album, was the biggest selling comedy record of all time in 1972 and remained so for many years. Their stunningly successful comedy streak transitioned to film in 1978 with their first movie, “Up In Smoke,” the highest grossing comedy of 1978, topping $100 million at the box office. Cheech & Chong co-wrote and starred in a total of eight feature films together, all directed by Tommy Chong.

After a hiatus starting in the late 1980’s through to 2008 Chong reunited with his old comedy partner Cheech to announce their first tour in over 25 years. Initially regrouping at the world famous Troubadour, The “Cheech & Chong: Light Up America & Canada” tour proved to be one of the most successful comedy tours of that year, selling out multiple shows from coast to coast and reinstating the pair as living legends
of the comedy world.

The most fun you will have all year while still keeping it legal, Cheech & Chong: Up In Smoke

Cheech & Chong Up In Smoke- The Greatest Hits Tour