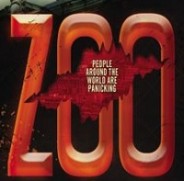 Kristen Connolly last seen in House of Cards, and Twilight’s Billy Burke are set to star in a new CBS program called “Zoo”, debuting on their Summer line up.

Connolly and Burke will star opposite James Wolk (The Crazy Ones) based on the best selling book by James Patterson.

“Zoo” is thriller about an uprising of animal attacks on humans across the planet, with the plans become more violent and planned as time goes on. Wolk will play and ambitious biologist, Jackson Oz who races against time to stop this global pandemic. Connolly will be cast as Jamie, a young but passionate journalist who is trying to piece the story of why the animals came to have this behavior. Burke will plays the role of Mitch, a straight up veterinarian who prefers the company of the animals to the humans.The cast will be completed with Nora Arnezeder (Safe House) and Nonso Anozie (Game of Thrones), James Patterson will also have a role in producing his book adaptation.Brad Anderson (The Machinist) will be directing.