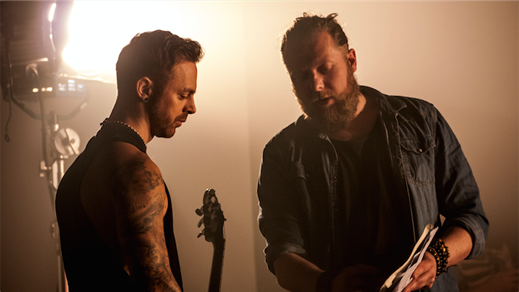 BULLET FOR MY VALENTINE Unleash Video for You Want A Battle (Here’s A War)From Their 5th Studio Album, Venom Coming August 14.

Hot on the release of their new single, “You Want A Battle? (Here’s A War),” British metal heavyweights Bullet For My Valentine have released an incendiary video. The single is featured on the band’s long-awaited new album, VENOM.

Directed and edited by Stuart Birchall (Bring Me The Horizon, Young Guns) and produced by Nathan Killham of Kode Media, “You Want A Battle? (Here’s A War)” is a narrative video that shines a light on domestic violence and abuse.

“I have always wanted to work with Bullet and I knew after talking with Matt [Tuck] that the style of storytelling I had in mind was very well suited to their own ideas,” says Birchall. “The band and label were very respectful of the creative process and allowed me to develop and refine concepts until we had the perfect fit. We were all keen on making a bold, dark statement about abuse that would resonate with a wide audience and complement this with a stylish performance. Everyone involved worked hard to bring the vision to life, it is always humbling to work with such dedicated cast and crew. As a filmmaker, being trusted and given creative freedom by the artist to interpret their message is where the most powerful work is done”.