Performances by: Jimmy Eat World, The Used, Dashboard Confessional Thrice, The All-American Rejects, Saves The Day, Glassjaw, The Movielife, Story of The Year and More 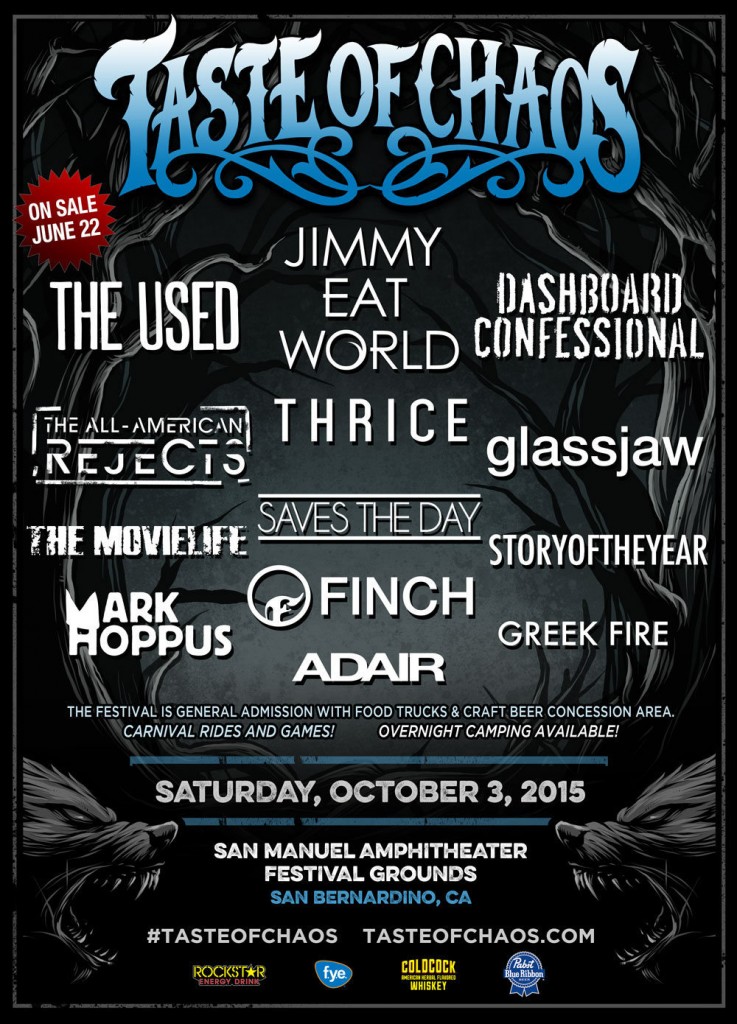 After a 5-year hiatus, the long-running worldwide phenomenon known as Taste of Chaos makes its triumphant return this fall as an annual SoCal destination festival, on Saturday, October 3rd, when it takes over the San Manuel Ampitheater Festival Grounds in San Bernardino, CA.

Paying homage to the alternative/indie scene which spawned many of today’s biggest rock acts, Taste Of Chaos 2015 will feature a historic lineup including Jimmy Eat World, The Used, Dashboard Confessional, Thrice, The All-American Rejects, Saves The Day, Glassjaw, The Movielife, Story of The Year, Finch. Mark Hoppus (DJ set), Greek Fire and Adair.

Additionally, Taste Of Chaos will feature an array of food trucks and a craft beer concession area, along with carnival rides and games. On-site overnight camping will also be available.

All tickets for the shows are general admission and will go on sale at 10 am PST this Monday, June 22 at TasteOfChaos.com. Early bird tickets will start at just $25.00 and will increase from there. The regular on sale price will be $42.50. Prices do not include ticket service fee or parking.

An extremely limited number of special VIP packages will also be available. The first, at $199.00 (“Taste of Chaos VIP Lounge”) includes fast lane entrance into the festival, VIP Laminate with lanyard, VIP Lounge access (located directly next to the main stage festival area) along with complimentary beer and snacks (while supplies last), full cash bar and VIP restroom trailers. Must be 21+ to get into the VIP Lounge. A second package for $299.00 (“A Taste of VIP”) includes all of the above, plus a The Used/ TOC Commemorative VIP laminate w/ lanyard, a meet and greet/one-on-one photo opportunity with Bert, Jeph, Justin and Dan of The Used, a collector’s edition Taste of Chaos screen-printed poster for autograph signing and a The Used t-shirt merch pack.

Originally launched in 2005 by Warped Tour founder Kevin Lyman and John Reese (co-founder of Mayhem Festival, Odd Ball Festival), Taste Of Chaos went on to hit 20 countries around the world over its five-year run, helping to launch the careers of bands like Thirty Seconds To Mars, Paramore, My Chemical Romance, Chiodos, Saosin and more, while highlighting such fan favorites as The Used, Deftones, Avenged Sevenfold, Rise Against, Thrice, Story of The Year and Taking Back Sunday.

Lyman says, “We couldn’t be more excited to re-launch Taste of Chaos in 2015, as one of the premiere annual alternative rock festivals of the fall; And what better place to do it than Southern California.”

Reese adds, “The epic lineup for the relaunch captures the essence of what Taste of Chaos has always been about: A celebration of the alternative/indie/rock scene, an epic day out with some of your favorite bands, great food and good memories.”

Live Nation, Executive V.P. of Booking, Rich Best, says, “This fall we are thrilled to be kicking off what we are confident will become a new annual tradition for SoCal alternative rock fans.”