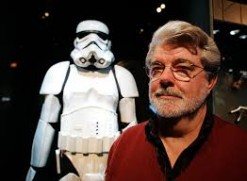 George Lucas has revealed to Cinema Blend that when he sold Lucas Films to Disney in 2012 his company had idea’s for the new Star Wars trilogy.

With Disney set to release the 7th installment, directed by JJ Abrams, “Star Wars, The Force Awakens’, it looks as though they haven’t used any of Lucas’ idea’s.

When questioned by Cinema Blend about this he said that “Well the ones I sold to Disney and everything, they came up to the decision that they didn’t really want to do those. So they made up their own. It’s not the ones I originally wrote”

So what do you think? Can Disney pull of Star Wars with out Lucas and the ideas he had? With Disney buying Lucas films for $4 billion plus, it’s sounds like they are happy to take the reins and wipe their hands of anything that is Lucas created.