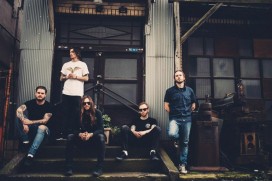 After bursting back on the scene with a killer set at Download’s packed main stage which culminated in frontman Loz Taylor clambering to the top of the sound tower,
Sheffield metallic hardcore heroes WHILE SHE SLEEPS will release their eagerly anticipated second album ’Brainwashed’ on March 27th
Perfectly poised to enable their cult success to power into mainstream consciousness, ‘Brainwashed’ was recorded by Carl Bown (Trivium), mixed by Colin Richardson (Bullet For My Valentine, As I Lie Dying)  and mastered by Grammy Award winner Ted Jensen. In addition to the regular 12-track edition of the album, ‘Brainwashed’ will also be available as a deluxe edition with three additional tracks, on vinyl and as a special box set edition.