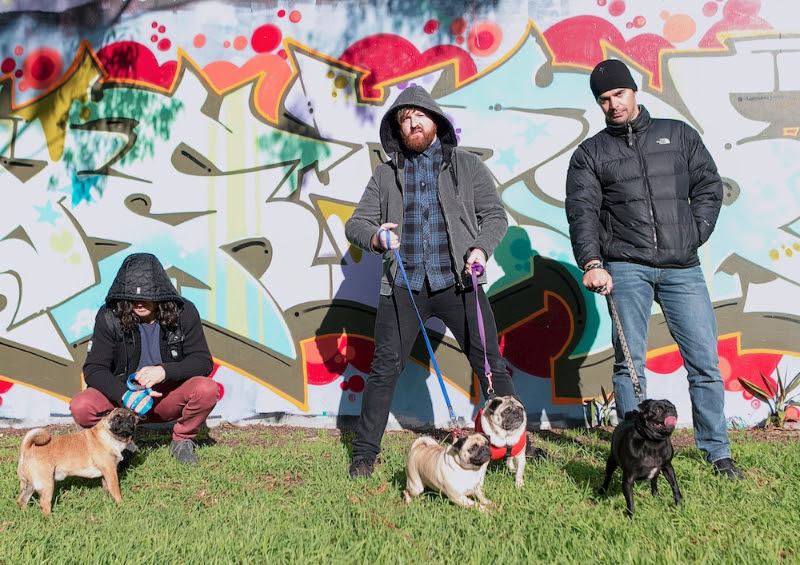 After the success of their ‘Status Updates’ album release tour, the Besties are back with another single from their debut long player, this time showcasing the band’s knack for catchy hooks with feelings, rather than gritty politics all the time.

‘All My Friends Are Leaving Town’ is about the three band members’ own experiences growing up in regional NSW and Victoria, and losing mates to greener pastures whether it be after high school, or after uni in Canberra.

The new single also comes with a new video directed by Jimmy Logue, featuring Instagram’s ‘Punky The Pug’ out on a sunny Sunday with thousands of other dogs and one oblivious owner glued to his iPhone, played by singer/guitarist Johnny Barrington. The video is about missing out on real life because of social media addiction (something Barrington admits he needs to work on) and shows that ‘Status Updates’ also has a strong focus on social issues and relationships, much like the ranty world of Facebook and Twitter, from where the album title is borrowed.

Since releasing ‘Status Updates’ on Gun Fever Records in March, the band rounded out their album tour supporting Peep Tempel at Newtown Social Club and their entire live set was recorded for broadcast on Sydney’s FBi radio.

This month, the band’s open letter to Joe Hockey about the average Australian musician’s income went semi-viral, further entrenching their legitimacy as the band that brought back the political rock record this year, to rave reviews.

Super Best Friends are also part of this year’s Big Sound line-up in Brisbane, where they’ll be right at home alongside Born Lion, Grenadiers, High Tension and legends Cosmic Psychos.

SUPER BEST FRIENDS
The ‘All My Friends Are Leaving Town’ Tour