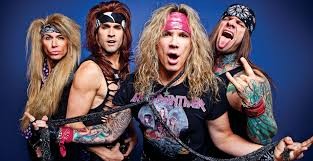 Steel Panther are rude, crude and a shocker in the best possible way. They are attributed with bringing glam metal back to the masses. We got a chance to chat with the Californian bands drummer Stix Zadinia about the Grammys, Valentines Day and their upcoming Australian appearance at Soundwave festival.
SCENEzine: First of all thank you for speaking to us. How has 2015 been for Stixx and Steel Panther so far?

Stix Zadina: It’s been a bummer a man… just kidding… its been fantastic! We have been close to home and only played a couple of shows and we can’t wait to just get back out there and go on tour!
SCENEzine: So many Australian fans were disappointed Steel Panther weren’t on the initial Soundwave 2015 line-up.Was that part of some grand plan to save the best until last?

Stix Zadina: Man, AJ contacted us and it was like boom we have 24 hours to see if we get to do it or not and it was like up until that call came I was feeling heaps bummed about not getting to play another Soundwave but, luckily for us, the call came and we were like ‘fuck yeah, lets do this’.

SCENEzine: Is Steel Panther excited about coming Down Under?
Stix Zadina: We are always excited to come play in Australia, you guys were like one of the first to get us and we just love playing for you, man, the crowd is always awesome!
SCENEzine: This isn’t Steel Panther’s first time at Soundwave. Do you have any memories of the last time you played the festival?

Stix Zadina: Aww, man, I remember things quite hazily, you know. I was partying a lot with Myles Kennedy and its like, I have a whole bunch of memories here and there but, I tell you one thing, we had a great fucking time everywhere we went.

SCENEzine: Steel Panther are also playing some pretty awesome sidewaves with Slash. Are you looking forward to those shows?

Stix Zadina: Yeah man, the thing about those shows is they’re going to be so great and we are so looking forward to playing with Slash and Myles, man, its going to be fantastic! You know some folks are going to show up for Slash, some for us, and some for both of us and everyone is going to have a great fucking time!

SCENEzine: How does playing Soundwave compare to playing other big festivals like Download in UK?
Stix Zadina: Man, let me tell you the thing you notice first is the women straight up, it’s like your summer down there so the women are way more scantily dressed and you just notice it straight away. Now don’t get me wrong Download is an awesome festival, even with the mud and shit, but the way Soundwave is set up its more communal and you get to hang out with the other bands and get to see them perform and have some rad get togethers. It’s great!
SCENezine: Your latest album is called ‘All You Can Eat’. What’s the craziest thing you’ve ever eaten while on tour?
Stix Zadina: The craziest thing I have ever eaten on tour was in France and, the one thing you got to understand is, I’m a plain eater. We were at this breakfast buffet and instead of just serving bacon and eggs, there was this whole pig! I had to just take a side of leg and, whilst it tasted good, it wasn’t for me and it’s not something I’d try again.
SCENEzine: Speaking of your latest album how do you feel about not being nominated for a Grammy? You clearly produced one of the best albums of last year.
Stix Zadina: Thank you, man, I thought so too, but as far as watching the Grammy’s goes, I caught bits and pieces but I find it not metal enough for me.
SCENEzine: Previously Steel Panther brought porn stars with them on tour Down Under. Any plans on another entourage this time around?
Stix Zadina: Not this time around. We are looking for some Aussie women though, to become apart of our entourage. The whole porn star thing we have been there and done that, so lets not do it again when there are so many good looking Aussie women.
SCENEzine: Steel Panther’s good mates Motley Crue are currently doing a farewell tour and will be releasing a biopic movie. Who would you want to play yourself in a film about Steel Panther? Channing Tatum?
Stix Zadina: To play me in a movie? I think Russell Crowe or maybe Mel Gibson would be good choices. Don Cheadle is another I think could play me, although if I really think about it, it would have to be Brad Pitt… if he was available, of course. 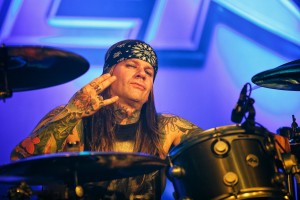 SCENEzine: Being the drummer you must be the fittest in the band. How do you stay in shape and prepare for a tour? Do you have any backstage rituals?
Stix Zadina: Yeah man, I play soccer and I just finished up a game right before actually. Now I wouldn’t say I’m a gym person but my number one way of staying fit is soccer.
SCENEzine: So you’re an LA Galaxy fan then?
Stix Zadina: I wouldn’t say so much an LA Galaxy fan, more like Tottenham Hotspur or Barcelona fan, that’s for sure!
SCENEzine: With AC/DC’s recent drummer dramas were you tempted to step in behind the kit for them?
Stix Zadina: Man, if they asked me I would have stepped in for sure, but I could never leave Steel Panther, we just have way too much fun together and that goes for any big name bands. It would be an honour to play for them but I just love it here in Steel Panther.
SCENEzine: Steel Panther have such emotional lyrics in their songs, especially on tracks like ‘Community Property’ and ‘Weenie Ride’. Do fans tell you a lot your songs are played at weddings and funerals?
Stix Zadina: Oh yeah, man, all the time! We have people coming up to us and say songs like ‘Community Property’ was the first song we danced to at our wedding or is our song, you know. Let me tell you it’s marriages like that that I think will last, you know, cause they have a good sense of humour in them and that’s what a good marriage needs.
SCENEzine: So no funerals then?
Stix Zadina: (Laughs) No, not that I know of! What type of songs are even played at funerals? Maybe “party all day, fuck all night” would be appropriate.
SCENEzine: Since Valentine’s Day is coming up, do you have any advice for Aussie blokes on how to woo a lady they might have their eye on?
Stix Zadina: Oh man, I would say don’t even bother… don’t even try… because once you do you have set a limit of expectations which you may have to live up to or even exceed every time. So I would say don’t ever bother trying!
SCENEzine: We at Scenezine have managed to catch you live in LA, Vegas and on previous Australian tours. But for any Steel Panther concert virgins what can they expect from their first time?
Stix Zadina: Bring a change of undies because we are going to blow the shit out of you!
Here’s a reminder of SOUNDWAVE 2015 dates-