For those with Revolution Rock Festival Hotel Packages, the weekend kicks off with the Friday Night Pre-Party at the Grand Ballroom at Foxwoods Resort Casino, featuring performances from Thunderstruck andStrutter.

On Saturday, festival doors open at 11:00 AM. The current performance schedule for Revolution Rock Festival is as follows (subject to change):

Fans are encouraged to buy now and save. Tickets for Revolution Rock Festival increase to the following week-of-show prices starting Monday, September 12 at Noon EDT and remain the same through day of show. General Admission tickets will be $99.50 (plus fees) and 4-pack GA ticket packages will be $358.00 (plus fees). Hotel packages are SOLD OUT.

Revolution Rock Festival has teamed up with some of the area’s yummiest food trucks and vendors to offer festivalgoers the ultimate food experience. Providing a wide variety of dining options, the following food trucks and tents will be onsite serving their specialties during the event:

*available in VIP area only

Sharethebus is the fun and easy way to get to Revolution Rock Festival. Sharethebus is offering same day transportation from Boston, Hartford, Providence, New Haven and New York City for a nominal fee. Get complete pricing and pick-up locations and times on the travel and transportation section of www.RevolutionRockFestival.com. Sharethebus was founded by two individuals from Montreal named Wolf and Kyle. They were fed up with how hard it is to rent a charter bus, and wanted a better way to travel together. In 2014 they started Sharethebus and quickly realized that what they’re offering is something that a lot of people want. Today, Sharethebus is a growing team of travel experts, developers, and rock stars who are building the best way for you and all your friends to go where you want, when you want, all while having a blast. 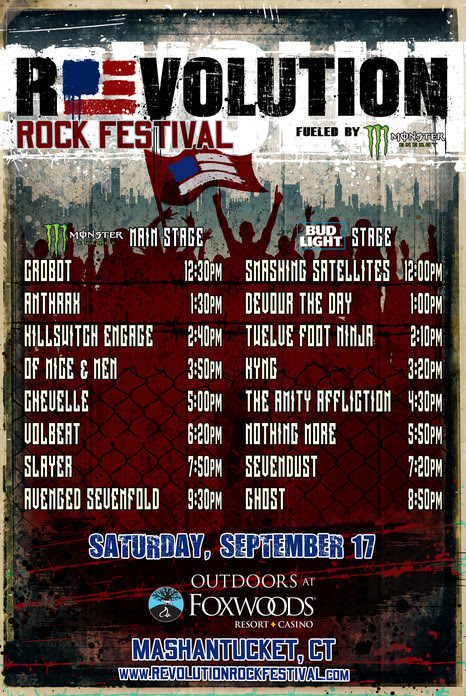