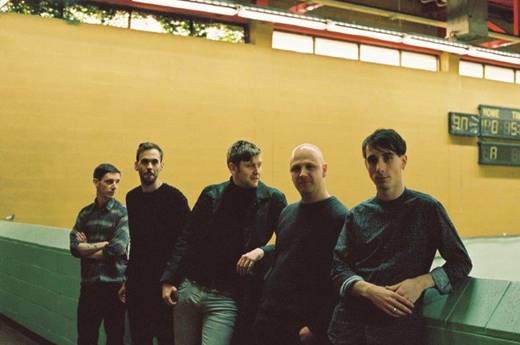 At the beginning of 2014, UK’s Outfit found themselves scattered across two countries and three cities, separated by life and love from each other and from those closest to them.

‘Slowness’, the band’s second full length LP due 15th June on new label home Memphis Industries and Shock Records, is the sound of its five members snatching intensive weeks to plant themselves in one place, with the tensions of touring, moving, and transatlantic relationships still weighing heavy in mind, to create an album with bold presence.

‘Slowness’ paints a portrait of distance using haunting piano, piercing synthesisers and guitars, all underpinned by Outfit’s trademark rhythm section. It dwells on physical distance between lovers, the emotional distance when we return, and the ways in which we imagine each other thousands of miles apart. Over the stuttering synths of opener New Air, the duelling lyrics of vocalist Andrew PM Hunt and keyboardist Thomas Gorton are rooted in optimism and beckon an unseen presence to join them in a new life, whilst closer Swam Out sees the band go from beaten and worn down to joyfully triumphant over the course of a song decorated with decaying Skype noises and 1am phone calls. The album’s contrasting textures and timbres recall late period Talk Talk and other more expansive New Wave outsiders, but there is a deep sense of modern life to ‘Slowness’.

Following up their critically acclaimed debut ‘Performance’, Outfit toured with Everything Everything, played the 6 Music Festival, Festival No. 6, End of the Road and Pitchfork Paris as well as several sold out London headline dates showing that the band could thrive as much in the live arena as they could in their home studio space- a Brutalist block of flats in Liverpool.

‘Slowness’ is Outfit’s most cohesive work to date, a marked progression both sonically and emotionally, capturing the harrowing shock of being in love and apart, and the stillness of staring into screens. Ultimately, though, ‘Slowness’ sounds like a band coming to terms with themselves as artists and people to create an album that celebrates life’s obstacles: a record made between New York, London and Liverpool -a piece of work compelled by distance.

watch the clip for the first single – New Air