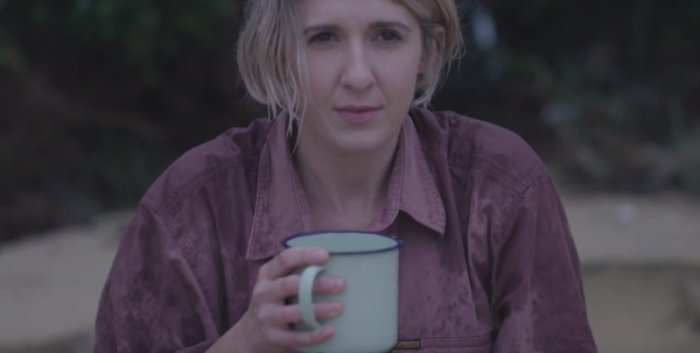 Brisbane / Byron Bay three-piece Moreton continue to mesmerize with the release of a stunning new video for their debut single ‘The Water.’

Directed by Fishing’s Russell Fitzgibbon, the video explores all that can happen in a brief moment of time. Set at a rainy, beachside campsite, Moreton front woman Georgia Potter stars in the clip and is seen sitting camp side with friends, and in the instant it takes for her to take a single drink of water from a tin camping cup, we’re exposed to the chaos and beauty operating all around her – from the rolling of a cigarette, the scaling of a fish, a seagull scavenging for sustenance, a girl’s ear being pierced, the saving of a drowning man, a surfer looking back into the ocean, and an old spectre staring out to sea. It’s all gloriously captured in slow motion, each moment heightened not only by the beautiful cinematography, but the presence of water in and around every element.

Potter described the video as a journey, “down the rabbit hole that is the song’s first lyric – ‘Everything I’m feeling now’ – one moment, and all things great and small that can happen within it. It is a tableau of souls on a beachside campsite, each of them experiencing something visceral or sensory, each of them strangely compelling and satisfying to watch.”

The release of ‘The Water’ video coincides with the band’s announcement that they’ll be releasing their debut EP Specimen, October 7. The band have also announced they will be showcasing the EP with their first ever east coast tour, playing shows in Brisbane, Sydney and Melbourne throughout November. Tickets are on sale now.

Moreton is also set to preform showcases at next month’s Bigsound Festival, playingWednesday, September 7 at Brightside from 4.10pm – 4.30pm, and their Official Showcase at The Foundry from 8.10pm – 8.40pm.