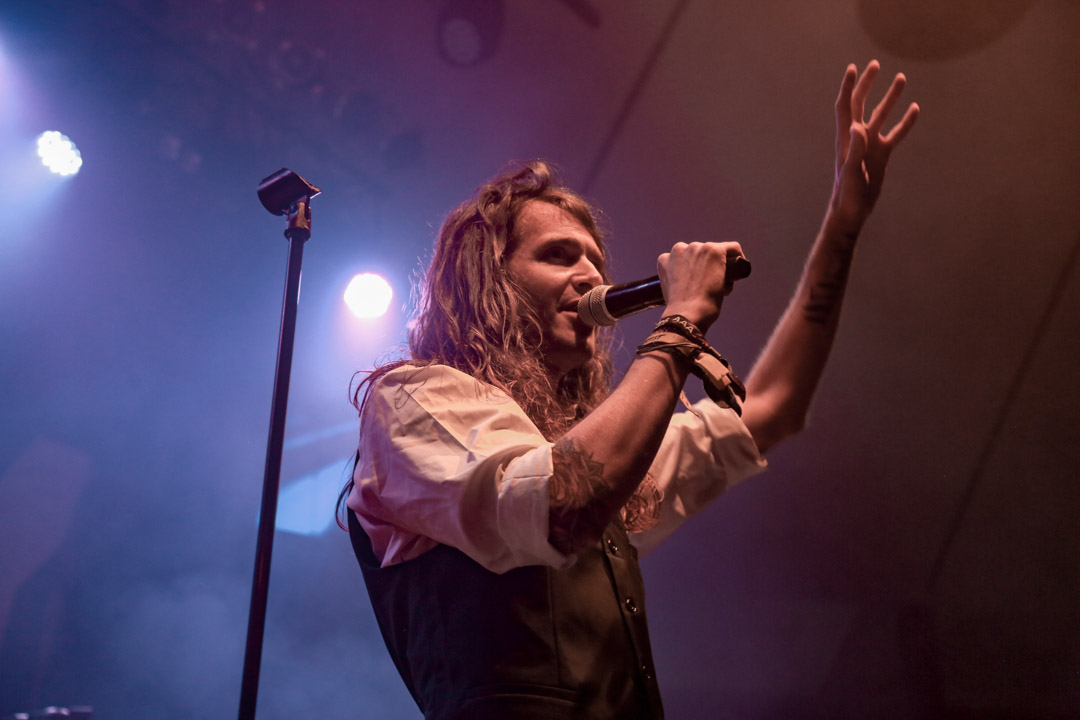 After four long years, Mayday Parade return to Australia, with their 10th 11th Anniversary Self-Titled Album Tour. The past few years without live international acts have been ‘Miserable At Best’, so we were thrilled to head out and see the assortment of pop-punk tonight had in store for us.

The show kicked off with up-and-coming Perth duo Those Who Dream. The bubbly pop-punk sensation played a set of originals, including their brand-new track ‘One Of My Kind’. We may not have known all the words to their songs yet, but these guys certainly warmed up the audience with their charismatic crowd engagement. It was clear they were greatly enjoying themselves on stage and seemingly in their element. Bringing a colourful energy to the Roundhouse that was paired perfectly by the bright pink & blue stage lights, the crowd were hyped up for the rest of the night to come.

After a short break, Chicago legends; Real Friends were excitedly welcomed to the stage. No strangers to Australia, the band is a crowd favourite. It was clear that no-one wanted to miss their set, with the entire sold-out audience in attendance already.

Fittingly opening with their 2018 hit  ‘Me First’, the high-energy set consisted of fan favourites,  ‘Get By’ & ‘I’ve Given Up On You’ which  had all of us passionately singing along, and really set the mood for the night of ballads that was unfolding. This is Real Friend’s first Australian tour with their new front man Cody Muraro, who took to centre stage to announce how glad he was to finally be here for the first time, playing some new tracks from the band’s EP Torn In Two.

In true Aussie spirit, the band chanted with the audience; “Aussie, Aussie, Aussie, Oi, Oi, Oi” and guitarist, Dave Knox knocked back a shoey of soda from a member of the crowd, before ending their set with their powerful hit ‘From The Outside’.

As the bar lines grew, the moment we’d been waiting for had finally arrived. Derek Sanders walked out onto the stage to roars of an eager crowd. You could tell it was going to be a wild night, as he was wearing his dancing shoes. The rest of the band joined him, as they kicked off the set with the opening track of their self-titled album, ‘Oh Well, Oh Well’. Throughout the set, both the band and the audience seemed elated to finally be sharing this moment together.

The band followed the order of their self-titled album for the first part of their set,  having us feeling nostalgic and transporting us back to 2011, when we would listen to this same track listing in our cars or on our iPods.

During the set, Derek paused to let us know how hard the last year of his life has been, reminding us that we are not alone in these dark times, but that better days are ahead. He explained how happy the band were to finally be back in Sydney. Having supported both Paramore & Yellowcard at the Roundhouse over the years, it was surreal to be playing their own sold-out headline show here.

The all-aged crowd were in full voice for both ‘Stay’ and ‘When You See My Friends’ almost to the point of surpassing Derek’s amplified vocals. Perfectly rounding off both the set and album with ‘Happy Endings’, the band left the stage, leaving the crowd hopeful that they would be back for more.

It wasn’t long before the band bounded back onto the stage, giving us a taste of their recently released album What It Means To Fall Apart, with their new hit ‘Kids of Summer’. This was followed by a one-two-punch of their emo singalong favourites; ‘Jersey’ & ‘Jamie All Over’ which had the entire crowd jumping and eagerly shouting every word.

I had a dream last night we went out to see Mayday Parade. We lost ourselves in the bright lights, I wish you could have seen it…

Well, actually Sydney, you’ve got one more chance tonight at the Roundhouse, with Mayday Parade back to the stage for ‘A Lesson In Romantics’, playing their 2007 album in full. Then Adelaide & Melbourne, you’re up next. Don’t miss out on this extravagant night of emo & pop-punk nostalgia.

(Parade of photos below by our very own Christian Ross)