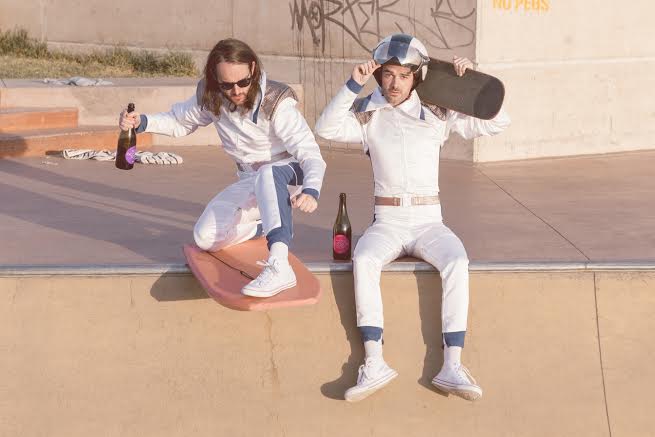 Always one step ahead of the scene (and the ladies), the decision in late 2014 by THE STIFFYS to evolve into a more serious art rock band saw the unveiling of some bold new outfits and the release of the first single (Kick Another Flip) from the bands forthcoming ART ROCK record due for release in late 2015. Having devoted the last few months to​ writing, recording and talking to ladies on social media, THE STIFFYS are back with another cracking new song and art rock video!

“ ‘Kissy Kissy’ is a song about kissing girls and how we’re really great at it. Both of us have heaps of experience kissing girls because we’re in a rock and roll band, we’re basically pros in that regard. This song is probably the most art thing we’ve ever done, so it felt natural to set the music video in space,” said Jason.

“We’re really pushing ourselves with this new ART ROCK record. Jason used heaps of guitar pedals and played slide bass guitar – I wore sunglasses during almost all of my drum takes. I suppose if there’s one key message for people to take from this song it’s that everyone should have a really great time all the time, and kiss each other a lot,” said Adam.

The track was recorded with Matt Neighbour (Courtney Barnett, British India, Davey Lane) at Melbourne’s Sing Sing Studios and is the second single from THE STIFFYS’ forthcoming third record – ART ROCK, due for release later in the year.