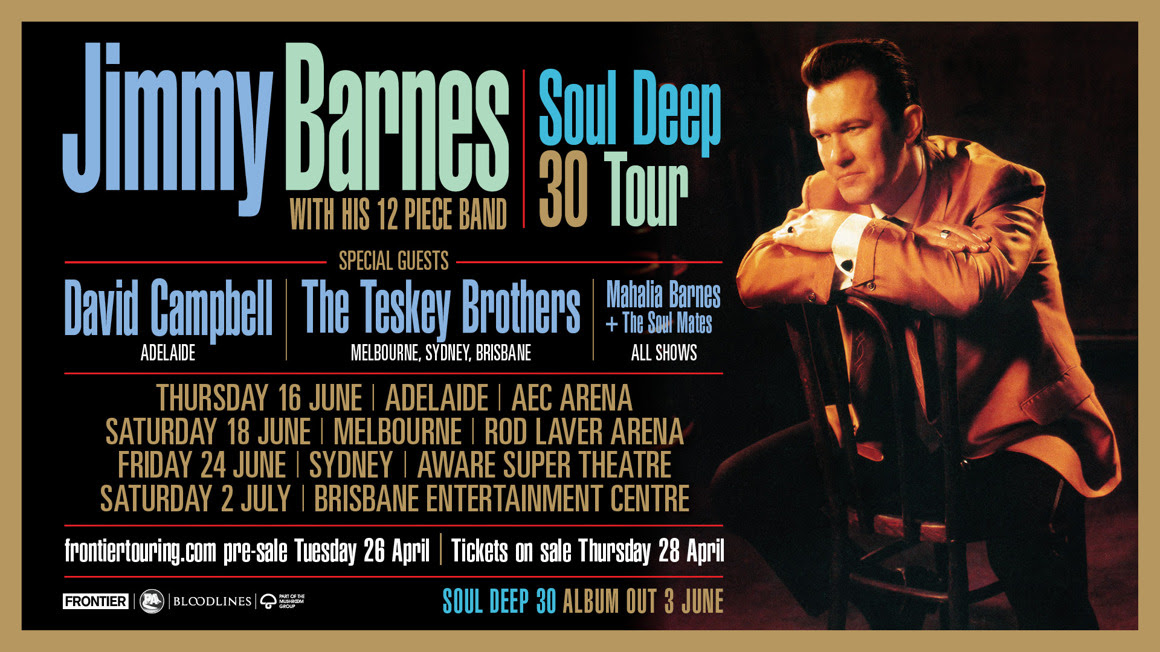 Classic Australian albums don’t come any bigger or better than Jimmy Barnes’Soul Deep. The trailblazing collection of sixties R&B was certified 10 times platinum in Australia, won the 1992 ARIA Awards for Best Male Artist and Highest Selling Album and remains the highest-selling album ever for both Jimmy Barnes and Mushroom Records. This iconic collection has now been re-imagined and extended for its anniversary suitably titled Soul Deep 30 (released Friday 3 June via Bloodlines).

Alongside the 12 original Soul Deep recordings, which have been remastered by Bob Ludwig and with additional production from Don Gehman, Soul Deep 30 includes 3 brand-new recordings: ‘Soothe Me’ (a blistering version of the 1967 Sam & Dave classic, featuring the legendary Sam Moore himself), ‘Do You Love Me’ (with the soulful vocals of The Teskey Brothers’ Josh Teskey), ‘Reflections’ (with the unmistakable vocals and guitar stylings of Ian Moss), plus a brand-new rock version of ‘I Gotcha’. The album is available for pre-order here now.

Frontier Touring are excited to announce Jimmy Barnes with his 12-piece band will tour in support of the forthcoming album, in a mix of arenas and theatres across Adelaide, Melbourne, Sydney and Brisbane this June and July. The Soul Deep 30Tour will include special guests, one of Australia’s finest, The Teskey Brothers* (exc. Adelaide), David Campbell (Adelaide only) plus Mahalia Barnes + The Soul Mates opening on all dates.

The original Soul Deep tour is widely regarded as one of Australia’s most legendary live events and this 30th anniversary reprise will feature a 12-piece soul band performing all the hits off this album plus lots of other R&B classics. Appropriately, the deluxe package of Soul Deep 30 will include an exclusive live bonus DVD filmed at the Palais in Melbourne on that famous first tour in 1991.

“I’ve always been particularly proud of Soul Deep. It was made for all the right reasons and there was something magical about the way it struck a chord with so many people. There’s a reason that all those great sixties songs are called “timeless” – the raw stories they tell make sense to every generation. I’m really looking forward to revisiting this music again live after all these years too. Hopefully we can remind people why they enjoyed this album so much first time around while also introducing it to a whole new audience.” – Jimmy Barnes

Pre-sale tickets are available to jimmybarnes.com subscribers or via frontiertouring.com/jimmybarnes from Tuesday 26 April, 11am local time. General Public on sale is from Thursday 28 April 10am local time.

The powerhouse soul and blues vocalist has been in and around music her entire life, having been exposed to everything from Aretha Franklin, Stevie Wonder, Ike + Tina Turner and Ray Charles, so it’s fitting that acclaimed singer-songwriter Mahalia Barnes + The Soul Mates open proceedings at all shows on the tour.

Special guest on the opening night of the tour in Adelaide is none other than Barnes’ family royalty and one of Australia’s leading musical theatre and soul singing entertainers, David Campbell. A proven television and radio host, Campbell headlines theatre, cabaret and concert performances, as well as being an ARIA winning, multi-platinum recording artist. In 2021, David proudly hosted ‘Music From The Home Front’, the Michael Gudinski/Mushroom Group ANZAC Day Special along with him releasing his 11th studio album ‘The Saturday Sessions’.

More about the Soul Deep 30 album
The album features three brand new recordings: ‘Soothe Me’ (featuring the legendary Sam Moore from Sam & Dave who created the original version), a reworking of ‘Do You Love Me’ (with guest Josh Teskey) and a previously unreleased collaboration called ‘Reflections’ with Cold Chisel bandmate, Ian Moss. Sam, Josh and Ian join John Farnham (‘When Something Is Wrong With My Baby’) and Diesel (‘Bring It On Home To Me’) who both guested on the original album.

All songs have been remastered for this deluxe reissue plus Kevin “Caveman” Shirley has created a new mix of the album’s lead single ‘I Gotcha’ as an additional bonus track.

Rolling Stone recently named Soul Deep one of the top 50 Australian albums of all time, calling it ‘a revelatory addition to one of the country’s most vital discographies.’

Jimmy Barnes made the original version of Soul Deep at his home studio in Bowral with producer Don Gehman who helmed six albums for Jimmy including classics like Two Fires, Heat and Flesh & Wood.

“Don loved my family and wanted to spend Christmas with us,” Jimmy explained in his best-selling book Working Class Man. “We would make an album for fun. It didn’t matter if we never released it. We decided to record all the songs I’d liked as a young singer; songs I’d heard on the radio, songs I sang at parties or at soundchecks.”

“We had a great time,” Gehman said of making Soul Deep. “It took literally about two weeks to make the whole record and most of the time was spent trying to figure out which songs to do because there were so many greats. The biggest joy is watching him sing. Because when he goes out and turns on, he’s just amazing. First takes are very common with him.”

“One of the things I learned from doing those classic songs was to concentrate on my performance and not to gloss them over with a lot of production,” Jimmy explains. “The important thing about soul music is to touch the emotions.”

Soul Deep was Jimmy Barnes’ sixth consecutive chart topper as a solo artist. Since that time, he has enjoyed seven more for a total of 13 (not counting his five with Cold Chisel!) which is more number one albums than any other artist in ARIA Chart history.

According to Jimmy, it’s been a labour of love to reimagine Soul Deep after all this time.

‘Soothe Me (featuring Sam Moore)’ single out now. Soul Deep 30 album is released on Friday 3 June through Bloodlines and can be pre-ordered here.