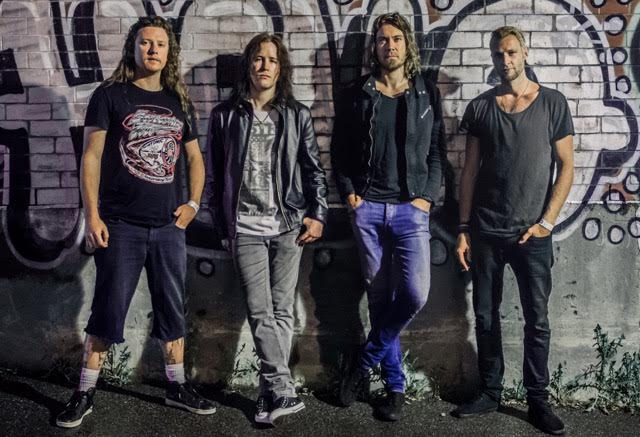 Australia has produced some quality hard rock in the last 50 years and that honest, straight up no bullshit rock n roll attitude is still prevalent and very much a part of today’s music scene. Hailmary live and breath it. The blood, sweat and tears, the denim and leather, the wall of sound. Stand in front of this band when they play and you cant help but get moving!
A rock band that makes you remember why you got into it in the first place! Loud guitars, even louder drums, vocals that send shivers down your spine and make you involuntarily raise your fist in the air.
Hailmary have the goods and are ready to deliver once more!
Having recently returned from the UK where they supported hard rock legends Ugly Kid Joe, and garnered a whole new legion of loyal fans,  Hailmary are gearing up to release a new EP and will be hitting the road in April taking their raucous energy all over the country. From Melbourne to Alice Springs, Perth to Cairns, you can count on Hailmary to bring the rock to the farthest reaches of Australia.
Gaining national attention by winning Best Heavy Rock release in the WAM (West Australian Music Awards) for their debut EP,Lottery Of Life, (in year) Hailmary rode the momentum and began touring incessantly. Releasing EP number two A Million Miles And Days in 2009, the band quickly became national road dogs but also set their goals higher and achieved them with s string of successful US dates.
Their debut full length, Choice Path Consequence Solution in 2012 saw them release their first music video for Yellow Light Of Death and continue their live assault on the nation, playing every festival and venue possible and earning their reputation as one of the hardest working bands out there.
In 2014 the band released their Navigate The Sunrise EP that saw them undertake an epic 26 date national run. They also released a video for the track My Song which is now a live favourite for the band and crowd alike.
With a solid catalogues of music under their collective belts and new material ready to share, Hailmary are itching to head out and play these shows.
The new EP is titled Evolve/Dissolve and will be released on April 9, 2016, Pre orders are now online at  http://hailmaryband.bandcamp.com
TOUR DATES
Friday, April 8: Yah Yahs – Melbourne w/ Swidgen, Olmeg and Cicadastone
www.facebook.com/events/193776204317868
Saturday, April 9: Brisbane Hotel – Hobart w/ Taurus and Starmaker
Sunday, April 10: Frankies Pizza – Sydney w/ Desecrator and Harlott
www.facebook.com/events/1054849884565897
Friday, April 15: Epilogue – Alice Springs
www.facebook.com/events/950922921611151
Saturday, April 16: The Jubilee – Brisbane
Sunday, April 17: The Balaclava Hotel – Cairns
www.facebook.com/events/1023938347652561
Friday, April 29: Amplifier Bar – Perth w/ Ragdoll
www.facebook.com/events/1873476552878863
Saturday, May 7: Prince Of Wales, Bunbury w/ Gombo
Tickets available at the door!