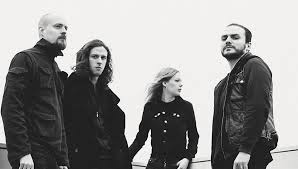 Grave Pleasures now complete their impressive and illustrious lineup with new drummer Uno Bruniusson (co-founding member of now laid to rest Swedish band In Solitude, drummer for Procession) who has joined their ranks in April 2015. Bruniusson’s vast experience, accomplished drumming flair and eclectic range of styles consummates the Grave Pleasures lineup into a formidable force to be reckoned with.

As self-styled apocalyptic post-punks, Beastmilk were one of the most talked-about bands in recent times.Their “painful war-cry of the eternally doomed,” as one journalist described it, resonated with fans of all genres. They were instantly picked up on by Pitchfork, NME and The Guardian with raving reviews, and took the music scene by storm.

In early 2015 they announced that co-founding guitarist Johan Snell had departed their ranks,and the band will continue under the new moniker of Grave Pleasures. But the rumbling grassroots momentum which built up behind them, has now transformed into something much, much bigger as Grave Pleasures announces that they have inked a deal with Sony. Heading into the studio with Tom Dalgety, frontman Mat McNerney proclaims that we can “expect a recording of raw, wild, intense and desperate punk that could ignite any dank bunker or collapse a stadium.”

McNerney expands on their vision by describing the debut album “Climax” as a “brief introduction.” He claims that “The new songs are so raw and so vital, that they delve much deeper. We’re not stopping at a prologue, we’re heading straight for the zenith of our sonic love affair with the apocalypse.”  The future of this band is surely going to be as unprecedented and extraordinary as its inception.The end has only just begun.