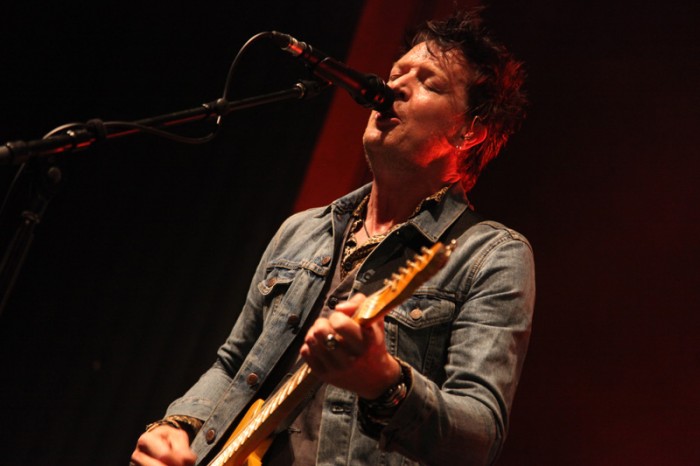 I really can’t think off the top of my head, any Aussie band whom made their debut during the 90s(which was really a great time period for Australian music) and release a brand new album(their 7th)and sell out the Enmore in Sydney on a Saturday night.  I really can’t and it’s so awesome to see The Living End do exactly this on the second show of their national tour.

They open the set with new track Monkey, being that is was the first release from the album Shift the crowd were already well acquainted with the words and were singing along from the start their enthusiasm for singing would only increase for the next track Roll On .Just watching Scott Owen move about the stage rocking out with his double bass and later doing his signature move where he stands on top of it re affirmed what I already knew that The Living end are such a great band to see live.

Monkey wasn’t the only new material they played for us we got other newbies like Death, With Enemies Like That, Staring Down The Barrel but it was new single Keep On Running that the crowd knew best from the new stuff. When it came to the best of the old stuff things got going early on in the set with the floor boards of the Enmore beginning to bounce and the crowd clapping along and erupting in voice too All Torn Down, Chris Cheney showing his excellent guitar skills as he trod out a solo in the middle of the song, a highlight of the evening.

It is the Queens birthday long weekend so ole Lizzy got her dedication on Moment In The Sun followed by What’s On Your Radio ? There was your typical your so much better than Brisbane comment which often gets a loud cheer, but a time came towards the end of the set to show those up top of the Enmore on the balcony how it’s done down the front on floor and show them we did. The crowd vocally louder than before and their were even people going over the barrier.

After that performance I thought they would be calling it a night but they still had more tracks to play first a new one followed by Pictures In The Mirror but the song that bought the biggest crowd interaction of the night was Prisoner of Society it had the whole place jumping up and down top to bottom. As we all yelled out in defiance ‘We don’t need no one like you TO TELL US WHAT TO DO!‘. It was like being a teenager again they finished off the 15 strong song set with White Noise and then came back out to do a three song encore.

The Encore starts with How Do We Know from White Noise then its time to bring the house down once again with West End Riot during which it was Chris who stood on top of Scotts Double bass. They would move into Carry Me Home, always a fitting song to end a show. Then Boom! the house lights flick on straight away and our evening is over. I guess those in the crowd approaching 40 either needed to get home and pay their baby sitters or perhaps hit up the merch desk to get a more up to date tour shirt they can wear for the next ten years or more. I must state though I had a really good time. I had come to see The Living End rock out their greatest hits and of course some of the new stuff which I can tell you sounded great live. Some bands just make me proud to be Australian and The Living End is definitely one of them. So go catch them as they roll on through the rest of their national tour, grab a VB and sing along.