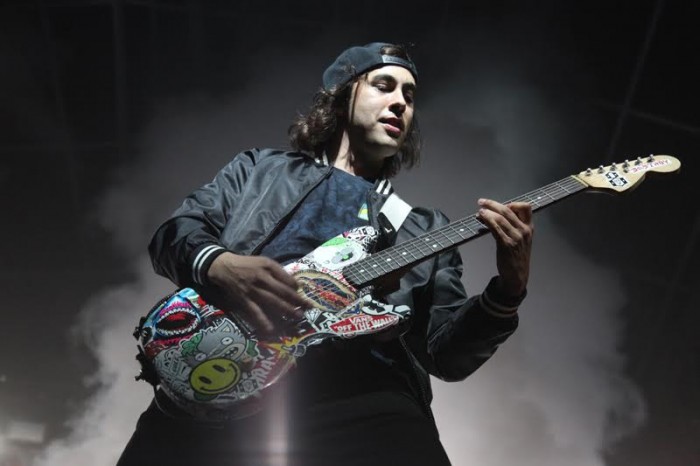 It is hump day and what better way to get over the mid week blues than hitting up a jam packed show at Sydney’s Luna Park, yeah behind that wide smiling grin is a stage set to explode with some major heavy hitting sounds from the most electrifying rock bands on the music scene today. First up will be Melbourne lads Storm The Sky followed by new up and comers Beartooth and before the main act it is Canadian legends of the scene Silverstein and headlining are San Diego’s Pierce The Veil.

Kicking off the night Storm The Sky owned the stage playing many brand new tracks from their recently released album Sin Will Find You. Frontman William Jarrett displayed his vocal skills whilst the adoring female fans screamed throughout. Storm The Sky were a perfect fit to open the show, only downside was the long line outside to get in meant many fans would of not seen the start of their set. This is definitely a band to watch I predict big things seeing them play “Jaded ghost” live is something not to be missed.

Returning from the bar and walking into Beartooth I am greeted by the wall of deafening sound and am instantly held up by a circle pit, the enthusiasm of youth more then makes up for the rest of us and it is everywhere up the front and round to the sides. The energy that is being unleashed is feeding the band on stage as they belt out major crowd favourites like Aggressive and The Lines.

Silverstein I think have lost non of the greatness over the years. True surviving bands of a scene that has had so many others come ago. They play a mix of old favourites that are still sounding as great as when I first heard them, then they play some of  the new stuff and it sounds fucking great I will never grow tired of seeing this 5 piece on stage mixing their sounds of vocal bliss and scream rage. On Sacrifice Shane asks Sydney to do one simple thing and that is from the front to the back from the left to the right that we jump and jump we did, you think we were trying to win gold. They close with a personal favourite Smile In Your Sleep.

The time has come to see the band we have all been waiting for as the stage lights dim and the screams go out over the top of all that noise begins a chant Pierce The veil ! Pierce The veil ! Pierce The veil !
Wow the main band really had it all a light show some confetti cannons oh and smoke machines they had them too and that’s from the opening song Dive In. The crowd bounce wave their hands clap in time and sing to every word then came on Caraphernelia What if I can’t forget you? I’ll burn your name into my throat I’ll be the fire that’ll catch you.

They pull a crowd member out she is super excited to be on stage as Vic starts to sing “Floral and fading” to serenade her. Got a feeling there was a few jealous girls in the audience.
Giving us a special treat they band tell us the story behind how the song Kissing In Cars came to be and how lucky we are to hear it live, hearing this track acoustically just goes to show how talented Pierce the Veil are.

The rest of the set would showcase two of their bigger hits as they launch into Hell Above and Bulls In The Bronx there was no stopping the crowd from singing and moshing on every track as they end off the set with Hold On Till May.

There would be no telling this crowd to go home that’s for sure as they begin to chant out for one more song ! one more song ! one more song ! The crowds efforts would be rewarded as they come back out with current hit Circles from their latest album Misadventures. It had been a fantastic night of screaming and going hard out on every track but as you can imagine the sheer intensity of the last song and biggest hit to date King For A Day had sweaty people everywhere over the barrier. They would fly by, girls would be crying in hysteria and even the staunchest of up the back arms folded type would let it all out. The whole thing would end as it began in a fury of screams and loud roaring guitar lights flickering confetti falling from the sky and machines billowing smoke.

Playing with such furious intensity Pierce The Veil present a sound and stage performance absolutely unmatched by their peers it’s easy to see why they are currently the band by which all others  should set the bar by. Sydney clearly has a Bulletproof love for Pierce The Veil hopefully they will return soon I guess we could hold on till May.